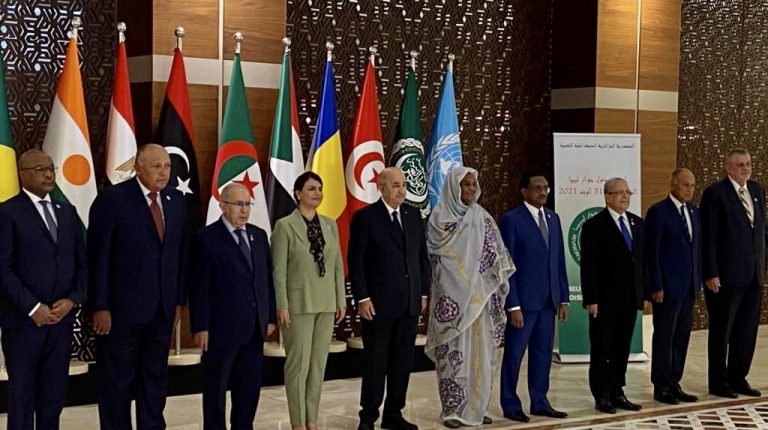 Foreign Ministers of the neighbouring countries of Libya concluded, on Tuesday, their meeting in Algeria, in which they stressed the importance of reaching a political solution to the Libyan crisis and ending the presence of foreign forces and mercenaries in the North African country.

The meeting attendees also called for holding the Libyan general elections as scheduled on 24 December 2021, as well as the speedy adoption of the constitutional basis for the polls.

The ministers stressed that all Libyan parties should resume talks to unify state institutions, especially security and military, since the biggest challenge facing Libya currently is the spread of militants and terrorist groups.

They agreed to form a regional mechanism “to support Libya and defend all just causes that bring together neighbouring countries.”

They also agreed to support the political path in Libya, and that a just solution in Libya must be based on its sovereignty, unity, and independence, and that the Libyan people have the exclusive right to decide their destiny.

In her speech at the conclusion of the meeting, Libyan Foreign Minister Najla Al-Manqoush affirmed that the stability of Libya is part of the stability of the region and the neighbouring countries.

She called on the countries neighbouring Libya to support and adopt the initiative to stabilize Libya, and to participate in the international conference that Libya will organize in late September in this regard.

The Algeria meeting also agreed to activate the quadripartite agreement on securing the borders between the southern neighbouring countries, in order to unify their positions.

Al-Manqoush added that the aim of declaring the Libya Stability Initiative is to be led by a Libyan national orientation and support the United Nations (UN) and brotherly and friendly countries to support the Libyans to choose their fate and future based on the outputs of Berlin conference 2+1.

She pointed out that the Libya Stability Initiative consists of two important tracks: the military and security track, and the economic track.

She added that the security and military track is the biggest challenge facing Libya today, especially with its progress towards the general national elections.

Al-Manqoush said that this requires the support of Libya’s partners and allies to work on unifying the Libyan army under one command to uphold Libyan sovereignty, integrating armed groups, and rehabilitating them on the security or civil levels.

She demanded the withdrawal of mercenaries and foreign forces whose continued presence poses a threat not only to Libya, but to the entire region, in addition to securing and protecting the Libyan borders to prevent destructive phenomena such as illegal immigration, human trafficking, organized crime, and smuggling.