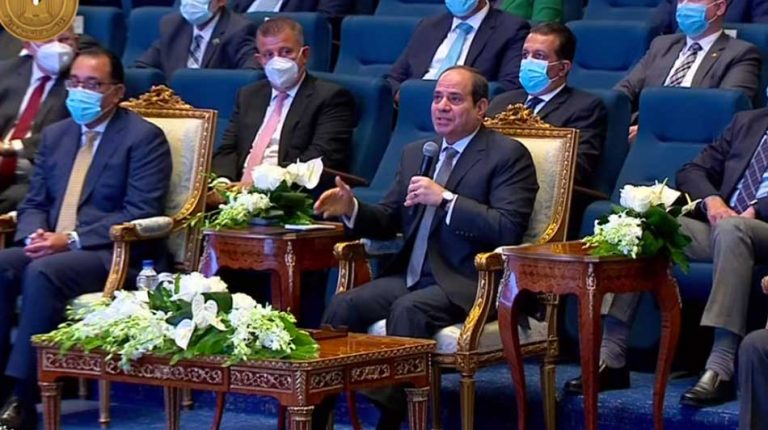 Al-Sisi’s remarks came during his participation in the Charity Doors (Abwab Al-Kheir) celebration at the New Administrative Capital, which targets raising the living standards of about 5 million citizens.

He said, “We sought to collect some EGP 100bn through TahyaMisr Fund, to provide more services for the Egyptian citizens, but we’re not there yet.”

He said that there is coordination between state agencies and civil society to organize charitable work in Egypt.

The President called on businesspeople and civil society institutions to contribute more to the social protection initiatives in order to improve the living standards of citizens.

He said that there is a proposal by Tahya Misr Fund to prepare projects for small farmers and replace or renew old cars.

He also directed to increase the number of beneficiaries of Tahya Misr Fund.

Meanwhile he explained that the state is working to achieve the highest rates of vaccination against Coronavirus (COVID-19) to reach collective immunity as soon as possible.

He urged the citizens to follow the precautionary measures to curb the spread of the novel Coronavirus during the fourth wave, asking the government to quickly finish vaccinating school and university students, teachers, and state workers.

The Abwab Al-Kheir is being carried out in coordination between the governmental and non-governmental sectors and civil society organizations, according to presidential spokesman Bassam Rady.

The ceremony comes as part of the state’s efforts to provide social protection to marginalized categories and improve the living conditions of citizens.

The convoy is organized by the Tahya Misr Fund in cooperation with the Social Solidarity Ministry and coincides with the International Day of Charity, which falls on 5 September, Radysaid.

The International Day of Charity was officially recognized by the UN General Assembly in 2012 with the aim of commemorating the anniversary of the passing away of Mother Teresa of Calcutta, who received the Nobel Peace Prize in 1979.

The date was established with the objective of sensitizing and mobilizing people, NGOs, and stakeholders all around the world to help others through voluntary and philanthropic activities.

During the ceremony, Madbouly said that “we are witnessing today a new  start for charitable work launched by this celebration, which we called Charity Doors, doors we open together to launch the largest humanitarian aid convoy to reach about five million deserving citizens, at an estimated cost of about EGP 650 million pounds.”

The Prime Minister added, “In addition to the humanitarian aid convoy that is being launched, we are opening other doors of charities for love, mercy, care, compassion, self-denial, and other noble and benevolent feelings. Then, let’s cross our doorsteps to help others outside.”

“To ensure the sustainability of the tributaries of charitable work, we must face at least two main challenges. The first is to establish charitable work in the hearts and minds of future generations. Then, we need to teach and train our children on how to be charitable, by setting a good example for them,” he explained.

Madbouly asserted, “We also need to train our children how to show empathy as it is the essence of charitable work and its main engine, and that we involve them in the charitable work”.