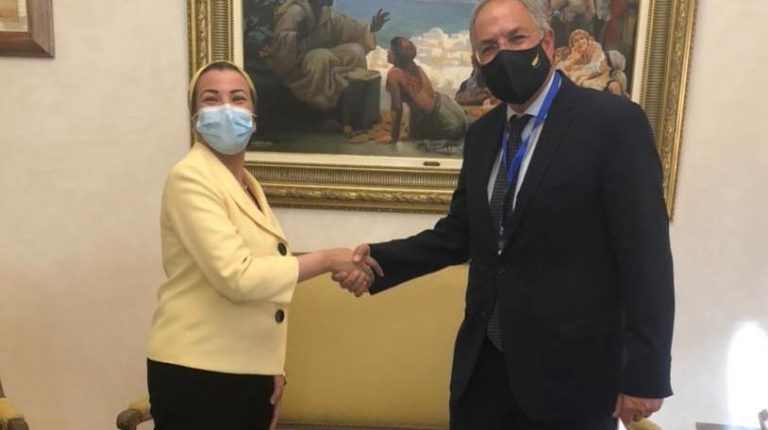 Egypt’s Minister of Environment Yasmine Fouad met, on Sunday, with Cypriot Minister of Agriculture, Rural Development, and Environment Costas Kadis, to enhance cooperation between the two parties in the field of environmental work.

The meeting comes within the framework of activating the work of the joint higher committee, which is being held for the first time at the presidential level between Egypt and Cyprus

During the meeting, Fouad stressed the depth of the Egyptian-Cypriot relations and joint cooperation between the two countries in environmental issues, whether at the bilateral or multilateral levels.

She also pointed to Egypt’s interest in the Cyprus initiative to coordinate joint climate action in the Middle East and Eastern Mediterranean regions, especially after many countries started to restore aspects of normal life and reduce precautionary measures to confront the novel coronavirus (COVID-19).

Moreover, the minister reviewed Egypt’s efforts in the issue of climate change, stressing Egypt’s keenness to cooperate with Cyprus to advance adaptation and confront the effects of climate change, especially with Egypt’s bid to host the Conference of the Parties to the United Nations Framework Convention on Climate Change (COP27), to be held next year.

For his part, the Cypriot minister reviewed the latest developments of the Cyprus initiative to coordinate joint climate action in the Middle East and Eastern Mediterranean regions.

He further stressed that Egypt is one of the main countries in pushing the initiative and supporting it in light of Egypt’s efforts in climate change negotiation. Kadis stressed his country’s keenness to support Egypt’s hosting of the COP27 conference.