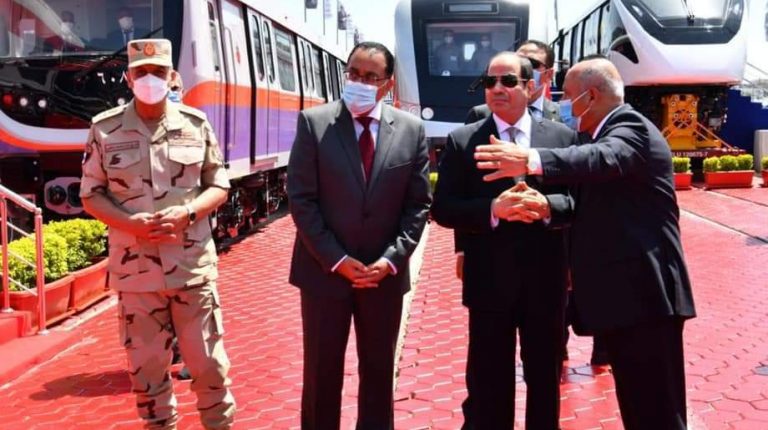 Egypt’s President Abdel Fattah Al-Sisi said the state aims to possess real economic potentials and benefit from its geographical location, asserting that the state has adopted different policies in this regard.

Al-Sisi’s remarks came during his inspection tour, on Tuesday, to follow up on the underway development work at the Alexandria Seaport, according to presidential spokesperson Bassam Rady.

Al-Sisi asserted that the state is now interfering to solve all the problems related to the establishment, expansion and development of major projects, in order to speed up the implementation of projects while reducing the cost.

Al-Sisi pointed out that the Ain Sokhna port has only witnessed the development of one basin for 25 years, but with efforts and funding from the government, it was completed, which shortens the way for investors.

He added that Egypt has become dependent on self-financing in implementing new projects.

Egypt will not allow any goods that do not match the European standards to enter the country’s land and sea ports, Al-Sisi confirmed.

The president added, “We will not accept any imported goods to enter Egypt except that in accordance with European standards, so that the Egyptian citizen can be reassured, We will not allow any importer to import inferior goods that only work for a week or two and then disrupt because of its law quality.”

President Al-Sisi said that the state is working to facilitate importing procedures for citizens.

He announced that there will be complete automation of the tax and customs sectors by March 2022.

Meanwhile the President said that the Egyptian state considers every young man as a great project, stressing that young people are the future and hope of Egypt.

He indicated that it is the youth who complete the implementation of the initiatives and projects carried out by the state.

This came while the President was listening to the views of a number of young people, on the sidelines of his inspection of the Alexandria port.

Moreover, Al-Sisi directed the Minister of Transport, Kamel El-Wazir, to provide full insurance for the rear back of the Alexandria sea port, asserting the need to pay compensation to citizens who were affected by the port’s development.

Furthermore, El-Wazir said that the government aims to develop the Alexandria sea port to turn Egypt into a center for global trade and logistics.

The minister added that his ministry biggest goal is to create transport and logistics hubs linking sea and dry ports and logistic areas, the most important of which is the Sokhna-Alexandria axis, passing through industrial zones, dry ports, and logistics centers in the 10th of Ramadan, the 6th of October, and Sadat cities.

He announced that at the end of 2021, the Sea Port of Alexandria will be one of the largest ports in the Middle East.