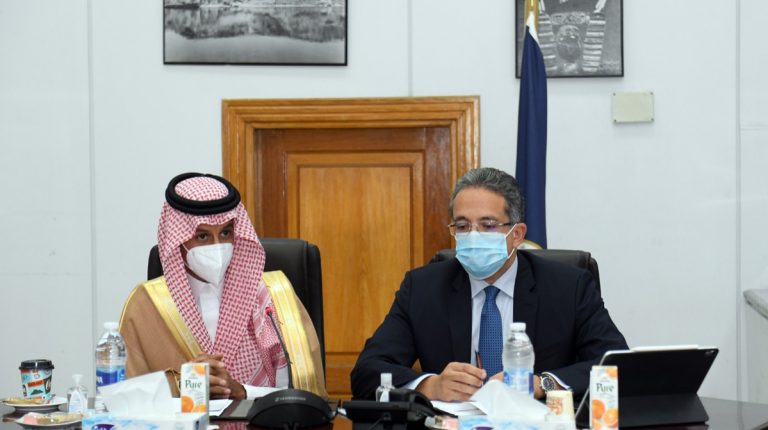 Khaled Al-Anani, Minister of Tourism and Antiquities, discussed with his Saudi counterpart Ahmed Al-Khatib, ways to enhance cooperation between the two countries in the field of tourism.

The meeting was held during the Saudi Minister’s short visit to Egypt, which lasted for two days. Ambassador of Saudi Arabia to Cairo, Osama bin Ahmed Naqli, attended the meeting.

The officials discussed exchange of expertise in the field of tourism, as well as coordination between the two sides for training workers in the tourism sector.

Minister Al-Anani praised the strong relations between the two countries in all fields, and expressed his appreciation for the efforts made by Saudi Arabia in development projects, especially the development of tourism infrastructure. He stressed that Saudi Arabia is one of the important tourist export markets for Egypt.

He pointed out that Egypt is an important tourist destination for Saudi tourists for many reasons, the most important of which are proximity, same language, and familiarity with traditions and culture.

The Minister of Tourism and Antiquities also reviewed Egypt’s tourism infrastructure and development projects carried out by the Egyptian state.

He also thanked the Saudi Minister of Tourism for this visit and for accepting the invitation to attend the Royal Mummies Parade in April.

For his part, the Saudi Minister of Tourism presented the recent development projects in Saudi Arabia, especially in the field of tourism, praising the steady relations between the two countries.

The Egyptian side included Ghada Shalaby, Deputy Minister for Tourism Affairs; Ahmed Youssef, CEO of the Egyptian Tourism Promotion Board; the general supervisor of the General Administration of International Affairs and Agreements, and a number of the Tourism Minister assistants for technical affairs and promotion.