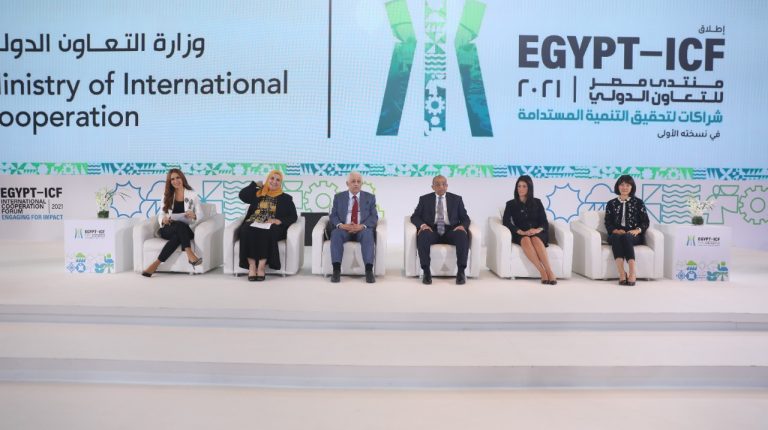 The panel gathered cross-sectoral Ministers: Rania Al-Mashat, Minister of International Cooperation; Nevine El-Kabbaj, Minister of Social Solidarity; and Tarek Shawky, Minister of Education and Technical Education. Joining them, there were multilateral and bilateral development partners, such as Keiko Miwa, World Bank’s Regional Director for Human Development; and Mamta Murthi, Vice President of World Bank for Human Development participated in the closing panel; along with Lubna Bouza, Editor in Chief of Sky News Arabia as the panel moderator.

The panel emphasized the importance of collective responsibility to ensure no person is left vulnerable or marginalized as communities and economies recover and rebuild after COVID-19.

Al-Mashat described human capital as “the core priority behind every project in Egypt”, adding that a country’s greatest asset is its people; hence the focus of the Ministry’s portfolio on bridging the financial gap to support the development of the country’s major infrastructure projects  in order to better the Egyptian people’s livelihoods.

Tarek Shawky, Egypt’s Minister of Education and Technical Education, opened the session with a quote by President of Egypt Abdel Fattah Al-Sisi stating that “the Egyptian people are the country’s biggest treasure” hence the focus of the Government of Egypt on placing the people at the heart of its 2030 Vision.

Shawky discussed the educational reform in the country, implemented in 2016, which saw educational leaders “rebuild” the country’s curriculum for a more diversified and inclusive educational system. He further elaborated that providing children with a contemporary curriculum and teaching them skills relevant to the 21st century are essential steps in rebuilding modern economies.

“We started imagining how we aspire to see Egyptian kids in 2030,” he said about Egypt’s education reform, dating back five years. “We identified life skills on which to build new education systems.”

He further elaborated that there has also been a global focus as well as a national emphasis on encouraging children to learn technological skills so they can secure “jobs of the future”, in light of the pandemic that has changed the marketplace and the skills needed for an agile workforce.

The panel discussion, organized by the Ministry of International Cooperation in partnership with the World Bank Group (WBG), reviewed the latest advancements in human capital development, showcasing the example of Egypt that has adopted recent economic reforms in aims for a sustainable economic framework.

Shedding light on the critical role of international cooperation in human development-led initiatives, especially in terms of technical support, the session highlighted the importance of harmonizing multi-sectoral efforts across all stakeholders to ensure people are at the forefront of the agenda.

Nevine El Kabbaj, Minister of Social Solidarity, spoke to the Forum about the urgent need to reduce poverty and ensure country-wide inclusion in a post-pandemic world.

A people-centric policy is not just a social issue, but one that can have far-reaching economic benefits, she added.

“There is a close relation between investment in human capital and economic output,” she said. “Human capital is just the start of it. We are fighting for the rights of everyone with no disparity, from women to people with disabilities.”

Addressing the Forum virtually, Mamta Murthi, Vice President for Human Development at the World Bank, commended Egypt for being an early adopter of the Human Capital Project (HCP) setting an example for neighboring countries to prioritize the issue. The global initiative aims to accelerate investments in people for greater equity and economic growth, bringing together national and international policymakers to assert their collective commitment to sustainable development as a catalyst for the post-pandemic economy.

She said it was vital that communities understand – like Egypt has – that human capital and human development is an investment. She reiterated that people are “the treasure of a nation”, adding: “We know no country that has sustained long-term growth without investing in its people.” She noted that investing in people is a “whole-of-government approach” and not the responsibility of a “single ministry”.

Keiko Miwa, Regional Director for Human Development at the World Bank, also praised the example set by Egypt, which has been undergoing socio-economic reforms since 2014, saying: “the pandemic really reinforced the importance of strong, resilient and inclusive systems. I would like to see Egypt as a leader of the region and share that experience widely.”