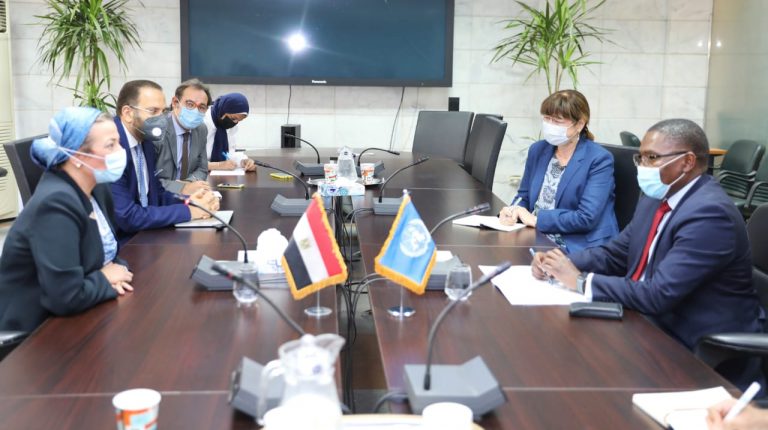 The meeting preludes to the approaching 26th session of the United Nations Climate Change Conference, also known as Conference of the Parties (COP26), in November.

The meeting also addressed Egypt’s hosting of the COP27 in 2022.

During the meeting, Fouad presented Egypt’s vision on climate change at the local and international levels, with regard to financing, adaptation measures and mitigating the effects of climate change, and setting national priorities and needs, stressing the need to deal with environmental problems and issues with innovative approaches and solutions.

The minister added that financing is an important part of the Paris climate agreement, so that developed countries provide the necessary financing for confrontation measures, but the most important thing is to achieve a fair distribution of financing among countries according to their needs and priorities.

“Implementation methods are still unclear, which represents a challenge for countries to obtain financing from multilateral funding sources such as the Green Climate Fund, especially that countries need time to develop their national plans and procedures for obtaining funding and mechanisms for managing it according to their priorities,” she said.

She also demanded an integrated and comprehensive governing mechanism that allows developing countries to access funding, while working to mobilise the necessary funding from donors, whether multilateral or microfinance from entities such as the Global Environment Facility (GEF).

Moreover, the Minister of Environment highlighted the need to consider the climate reporting system to take into account the national priorities of countries, in addition to clarifying the controversy over the degree of warming to which adaptation will be 1.5 or 2 degrees Celsius, so that the goals and indicators of countries’ national plans for adaptation are clear.

For his part, Hart hailed the great support provided by Egypt to the climate negotiations, and its keenness to work to achieve a balance between financing adaptation and mitigation measures.