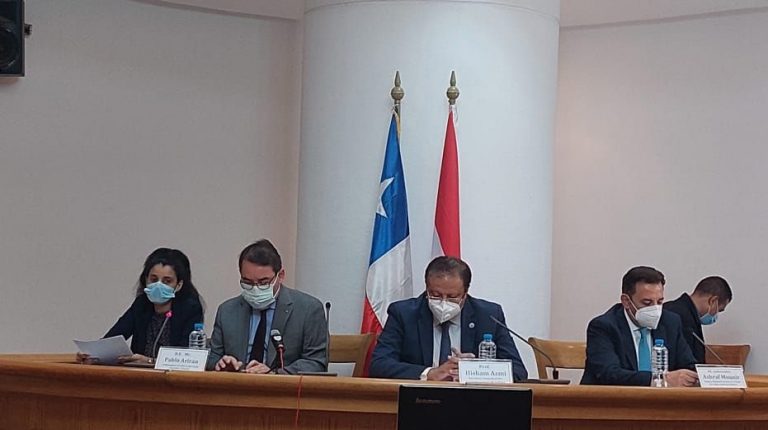 Head of the Supreme Council of Culture, Hisham Azmy, started the opening speech by praising the Cultural Relations Initiative, stressing that it confirms that Egypt will always treasure its cultural relations with other countries. This is the initiative’s second year. It was launched in September 2020.

Azmy explained that relations between Egypt and Chile date back to the early 20th Century. On the cultural level, a number of Chilean theatre groups participated in the Experimental Theater Festival in Egypt.

According to Azmy, Egypt contributed to the establishment of the Center for Arab Studies at the University of Chile, and funded student exchange programmes between the Ministries of Education and Higher Education of both Egypt and Chile. This is in addition to other cooperation programmes between the two countries, including the translation movement of Egyptian literature into Spanish.

Ambassador of Chile to Egypt, Pablo Arriaran, spoke about the history of Chile and its geographical location, which is dominated by desert, as in Egypt.

Arriaran explained that, like most Latin American countries, immigrants live side by side with the natives in Chile, highlighting the presence of Middle Eastern migrants, mostly coming from Palestine, Jordan, and Syria, where there are 450,000 Chileans of Palestinian origin.

He further pointed out that Chile has two Nobel Prize winners for literature: Gabriela Mistral in 1945 and Pablo Neruda in 1971.

The Chilean ambassador stated that the relations between Egypt and Chile began in the 1920s, and highlighted the cooperation between the two countries in international organizations.