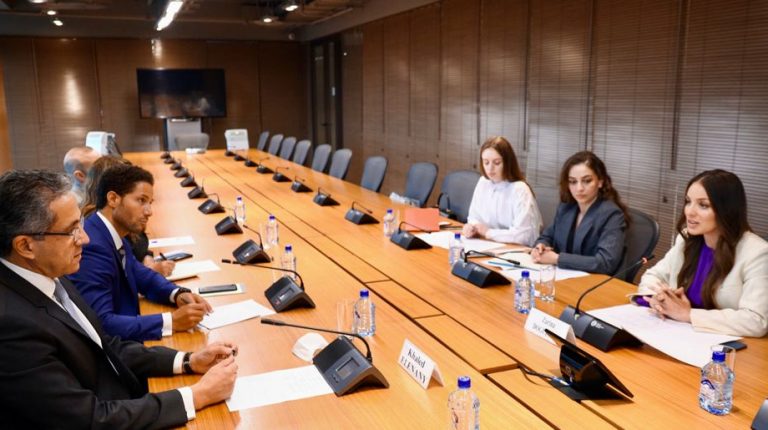 Egypt’s Minister of Tourism and Antiquities Khaled Al-Ananidiscussed in a meeting with Zarina Doguzova, Head of the Russian Federal Agency for Tourism, ways to enhance bilateral cooperation between the two countries in the field of tourism, and a number of issues related to the return of Russian tourism to Egyptian resorts.

The meeting came during the Minister’s current visit to the Russian capital, Moscow.

The meeting was attended by Ihab Nasr, Egypt’s ambassador to Russia, and the Egyptian delegation accompanying the minister.

In addition, they discussed the possibility of having a joint tourism committee working between the two countries to push the incoming tourist movement to Egypt from Russia.

They also discussed ways to achieve maximum benefit for tourism companies and establishments from the Egyptian and Russian sides from the decision to return Russian tourism to Egyptian tourist resorts.

During the meeting, Al-Anani reviewed the latest developments in the precautionary and preventive measures and health controls followed in hotels, tourist facilities, airports, museums and archaeological sites in Egypt to confront the Coronavirus, where the minister indicated that these procedures and controls are constantly updated.

The minister explained that the ministry is dispatching periodic inspection committees to ascertain the extent of everyone’s commitment to implementing these procedures to ensure the safety of workers in the sector, citizens and tourists.

The meeting touched on discussing and reviewing the incentives and facilities provided by the Egyptian government to tour operators to push more tourist traffic to Egypt from all countries of the world.

The minister pointed out that new airlines have been developed to connect the airports of the coastal cities with the cities of the valley and the integration of the beach tourism product with the cultural tourism product, which will give an opportunity for tourists to visit more than one tourist city during their tourist trip in Egypt and not limit the visit to one city only.

For her part, Doguzova, praised the depth of relations between Egypt and Russia and the various aspects of cooperation witnessed by the two countries, especially in the field of tourism.

She pointed to the positive impressions of the Russian committee, which came on a visit to Egypt last July to learn about the precautionary measures followed in the Egyptian tourist resorts.