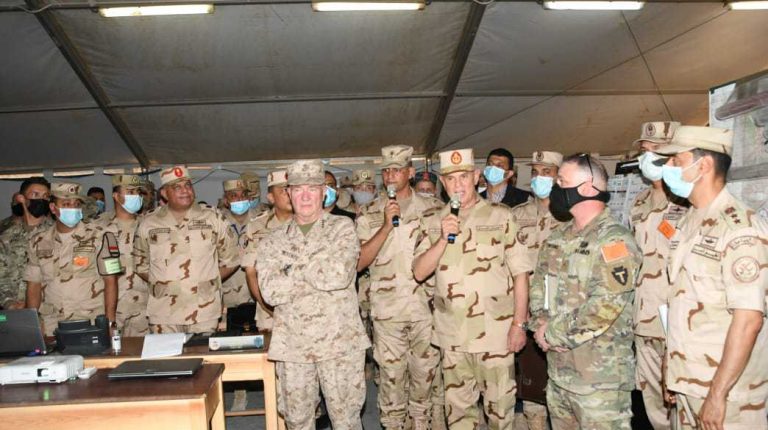 Mohamed Farid, Chief of Staff of the Egyptian Armed Forces, has met with Kenneth McKenzie, Commander of the US Central Command, and his accompanying delegation, who is currently visiting Egypt to follow up on the joint training activities “Bright Star 2021”.

The military exercises will continue until 17 September at the Mohammed Najib Military Base.

The meeting dealt with a number of topics related to training and the importance it achieves as it is a fertile ground for exchanging experiences among all participating elements, and what training represents from a rich military environment to learn about everything new in all military disciplines of various weapons.

Farid stressed the keenness of the General Command of the Armed Forces to follow up on all activities that are carried out on a daily basis and to create an atmosphere that achieves for all the elements involved in training the ability to carry out all the tasks and training activities entrusted to it.

The commander of the US Central Command praised the resonance that the training achieves in all international military circles, expressing his admiration for the ability of the Egyptian armed forces to organize the activities of this event, which is one of the most important and largest exercises carried out in the Middle East.

Both parties also toured the command and control centres to follow up on work mechanisms that depend on joint planning to manage training tasks.

Farid also inspected the training areas and fields and praised during the tour the high combat efficiency of all the elements participating in the training, as well as the training and administrative capabilities of the base and the training fields equipped to train the various combat and specialized elements.

This was followed by a meeting of the Chief of Staff of the Armed Forces’ war with all the elements participating in the training,

He also praised the distinguished level reached by the training during all the phases that have been implemented. .