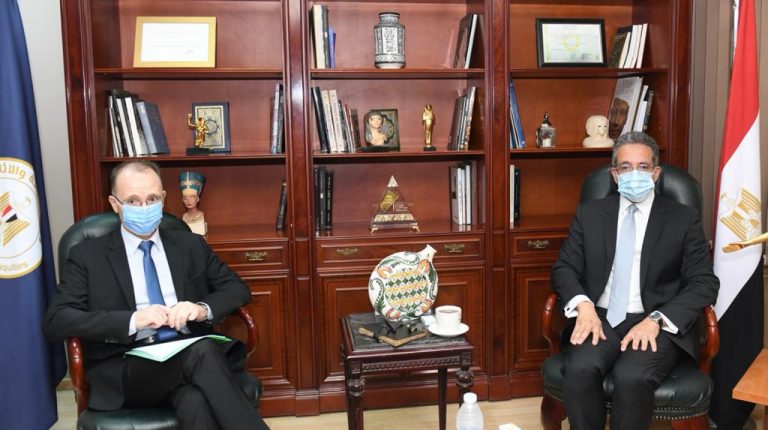 Khaled El-Anany, Minister of Tourism and Antiquities, has discussed with Bulgarian Ambassador in Egypt, Deyan Angelov Katratchev, ways to enhance cooperation between the two countries in the tourism and archaeological fields, in order to boost the tourist movement between Egypt and Bulgaria.

The meeting was attended by Dalia Abdel Fattah, General Supervisor of the General Department of International Relations and Agreements at the Tourism and Antiquities Ministry.

The Minister stressed the strong relations between Egypt and Bulgaria, which witness cooperation in all fields, especially the field of tourism and archaeological work.

During the meeting, a number of topics were discussed, including discussing tourism cooperation within the framework of the joint higher committee for cooperation between the two countries, completing the procedures for preparing a memorandum of understanding to enhance cooperation between the two countries in the field of antiquities and museums, training workers, and supporting cooperation measures to combat illegal trafficking in cultural property and combat trafficking and smuggling of antiquities. .

Bulgarian ambassador in Cairo was among the ambassadors of the European Union countries in Cairo who published more than 20 short films under the title “Egypt in the eyes of the ambassadors of the European Union” to promote the Egyptian tourist and archaeological sites on their social networking sites and their embassies’. They filmed these videos in their favorite archaeological and tourist places and dearest to their hearts, during which they narrate their experiences and memories in these places, expressing the reason for their admiration and connection with them.