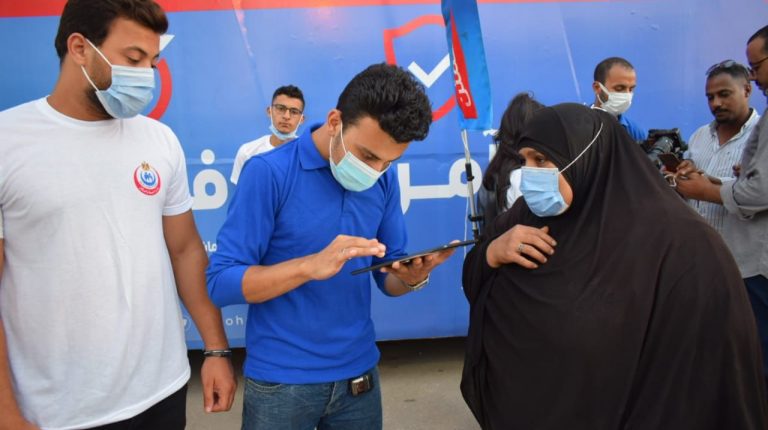 Egypt’s Minister of Health and Population Hala Zayed announced, on Monday, the launch of the “Together We Reassure… Register Now” awareness campaign in Damietta, Assiut, and Port Said governorates.

The campaign aims to encourage citizens to register and quickly receive the anti-COVID-19 vaccine on the same day.

Zayed also ordered the continuation of the campaign for one month instead of 10 days in each governorate, as the campaign is witnessing a massive turnout of citizens to register on the website to receive the vaccine.

So far, 30,244 citizens were registered on the Ministry’s website to receive the vaccine through the campaign during its work period in 12 governorates in which it was launched during the past five days.

Moreover, the campaign has provided awareness to more than 33,000 citizens of the importance of receiving the vaccine to protect themselves, their families and society from the risk of contracting the coronavirus.

Nine buses, in addition to equipped cars, have been allocated to the three governorates on Monday, and each bus includes 30 community communication teams of the Ministry of Health, who have been trained at the highest level and wear customised uniforms,

The teams are equipped with tablets to record citizens’ data on the website to receive the vaccine, and respond to all their inquiries and questions about vaccines.

Citizens who previously registered on the site and did not receive a text message can go to the campaign to get an instant message of the date of receiving the vaccine.

Moreover, the campaign toured various public places, squares, gathering places, public transport stops, metro and train stations, from 10 am until 10 pm. 18 youth centers were equipped in the governorates where the campaign was launched, for citizens to receive the vaccine on the same day immediately upon registration.

The campaign was launched in the governorates of Cairo, Giza, Alexandria, Fayoum, Dakahlia, Qalyubia, Kafr El-Sheikh, Beni Suef, Sharkia, Gharbia, Minya, Ismailia over the past five days, and is scheduled to move on Tuesday, to the governorates of Menoufia and Suez, and on Wednesday to Beheira and Sohag.

Over three days, starting Thursday, the campaign will expand to Qena, Luxor, and Aswan.