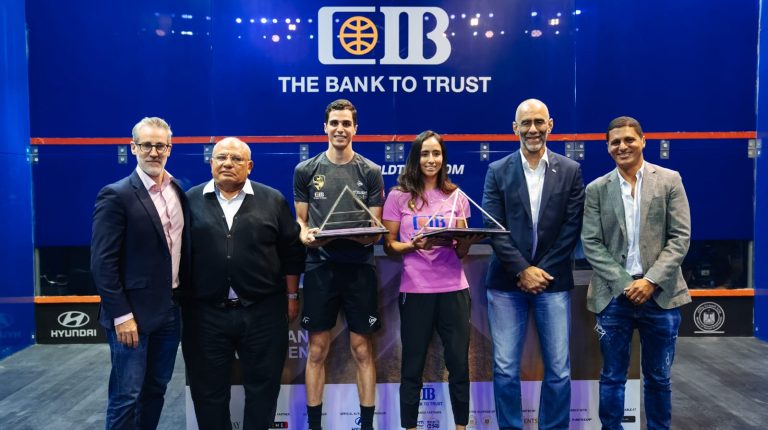 World No. 1 Ali Farag and World No. 2 Nouran Gohar were crowned champions of the CIB Egyptian Squash Open 2021, held at the Great Pyramids area in Giza.

The tournament’s closing ceremony was attended by Ashraf Sobhy, Minister of Youth and Sports; Hussein Abaza, CEO and Managing Director of CIB; Assem Khalifa, President of the Egyptian Squash Federation; and Alex Gough, CEO of the Professional Squash Association.

Through the tournament, Egypt was able to showcase its capability to host successful international tournaments despite COVID-19 challenges, which enhances Egypt’s image in terms of the economic and political stability. The tournament was held under strict health and safety protocols.

This year, the tournament presents the largest prize money among the eight Platinum events, reaching $590,000; bringing together the best 96 men and women players from 26 different countries

Hussein Abaza said, “I would like to congratulate the winners and extend my thanks to everyone who participated in this event, both players and organizers.”

“CIB is proud to hold a sports event that brings together a selection of the world’s greatest squash champions. The bank is committed to supporting sports initiatives in Egypt, given their great importance to Egyptian youth of all ages. We regard this tournament as an opportunity to further cement Egypt’s position as an international squash hub by inviting world-class players to compete in this major global event,” Abaza added.

Amr Mansi, Tournament Director and CEO of IEVENTS, said, “I feel proud and grateful that my dream is coming true year after year by organizing the CIB Egyptian Squash Open 2021 for the third year in a row.”

He continued: “I’m very excited to be among our champions, who represent a prestigious image to Egypt globally, reflecting the Egyptian achievements in squash that enabled us to occupy the top ranking after many years of dedication.”

Amr Mansi expressed his appreciation and gratitude to all sponsors and official entities that provided real means of support to the championship this year, especially the Ministry of Youth and Sports, and the Ministry of Tourism and Antiquities. Mansi extended his appreciation to CIB for the sustainable support to squash, especially in times of crisis. Mansi added, “It would have never happened without having a real believer and supporter like CIB.”