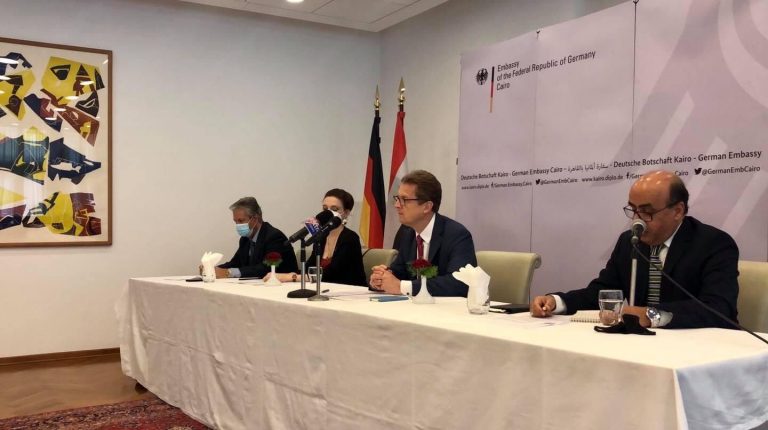 German Ambassador to Cairo, Frank Hartmann, has stressed that negotiation and diplomatic efforts are the only solution to the prolonged dispute between Egypt, Sudan, and Ethiopia regarding the filling and operation of the Grand Ethiopian Renaissance Dam (GERD).

“The UN Security Council has worked to achieve a fair distribution of [Nile] water between the three countries, Egypt, Sudan, and Ethiopia, but the dispute escalated in the recent period,” said Hartmann.

In a press conference on Monday at the German Embassy in Cairo, the German ambassador praised Egyptian President Abdel Fattah Al-Sisi’s invitation to Israeli Prime Minister Naftali Bennett for a bilateral meeting in Sharm El-Sheikh. He described the move as “courageous”, and that it would have a positive impact on the negotiation track between Israel and Palestine.

In a different context, Hartmann said that Egypt was always the country he wished to work in, stressing the depth of strategic relations between Egypt and Germany, and strong cooperation in several economic, political, and cultural fields. He also praised the role played by the Egyptian state in supporting peace in the Middle East, highlighting Cairo’s success in forging the ceasefire deal between Hamas and Israel last May.

He stressed that Middle East crises can only be solved through negotiation, noting that Germany has opened a dialogue with Egypt on this issue within the framework of the Munich Group.

On economic cooperation with Egypt, he stressed that Germany is Egypt’s first commercial partner and has large investments in various fields, including new and renewable energy, gas, and others. He added that last month witnessed the signing of the largest deal between Egypt and the German company Siemens to establish the first high-speed electric railway, connecting the east and west coasts of Egypt.

Hartmann pointed out that German investments are concentrated in energy projects in Ain Sokhna and Aswan, and that there are negotiations between German companies to manufacture green hydrogen in Egypt.

Hartmann noted that Egypt has balanced between its efforts to combat COVID-19, protect the health of citizens, and preserve economic development, expressing his hope that Egypt will continue to control the pandemic.

Regarding Egypt’s support to combat COVID-19, Hartmann affirmed Berlin’s keenness to support Cairo to confront the virus spread through vaccination.

As for security cooperation, Hartmann stressed that both countries work closely in regard with Middle East security issues, including Libya, expressing his hope upcoming elections will be held on 24 December as planned. He applauded Egypt’s great efforts to ensure security and stability in Libya, referring to cooperation with Cairo to combat terrorism and terrorist organizations.

Regarding women’s empowerment, the German ambassador praised the recent legislation issued in Egypt to support and empower women, which set the legal age of marriage and criminalized FGM.

Hartmann concluded that everyone in Germany is awaiting the legislative elections in the country, which will result in the departure of Chancellor Angela Merkel after 16 years in power. He noted that the German foreign policy does not affect these elections, except for the withdrawal of foreign forces from Afghanistan.