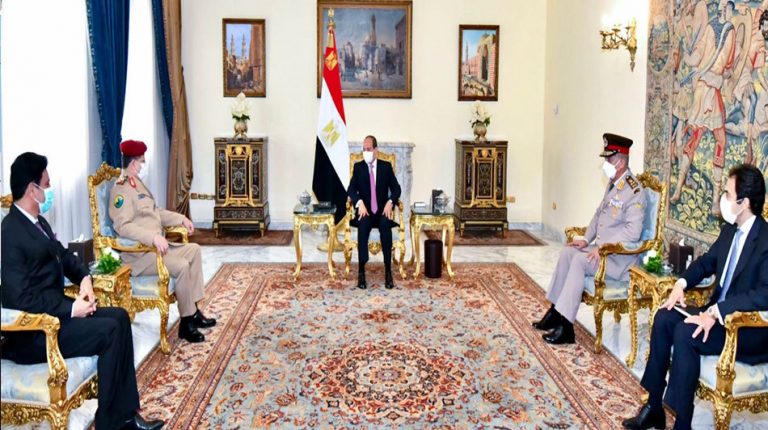 Egypt’s President Abdel Fattah Al-Sisi has asserted his country’s firm position to support all efforts to reach a comprehensive political solution to the Yemeni crisis.

Al-Sisi said that this solution should achieve stability, unity, and independence of Yemen’s territories, and meet the aspirations of the Yemeni people, and end foreign interference in Yemen internal affairs, according to presidential spokesperson Bassam Rady.

Rady said that Al-Maqdashi conveyed the greetings of Yemeni President Abdrabbuh Mansur Hadi to Al-Sisi, hailing the continuous cooperation between both countries in all fields, especially at the military and security levels.

Al-Maqdashi has also expressed his country’s aspiration for a continued support from Egypt towards enhancing the political efforts aimed at containing the situation in Yemen and ending the humanitarian crisis there.

Al-Sisi stressed that providing political support to brotherly countries is one of the principles and constants of Egyptian diplomacy, and that Egypt will spare no effort to help Yemen through its crisis.

Since Iran-backed Houthi rebels took control of much of Yemen in 2014 and the Arab Coalition intervened militarily to reinstate the internationally recognised government in 2015, the UN has been seeking a political solution to the conflict in Yemen. But peace efforts have been complicated by the intervention of hybrid state and non-state actors.

After six years of war, Yemen remains the world’s largest humanitarian crisis. The United Nations experts said the crisis in Yemen is worsening on all levels, especially for children.

Almost four million people have been displaced by the fighting, and four out of every five people are in need of humanitarian assistance.