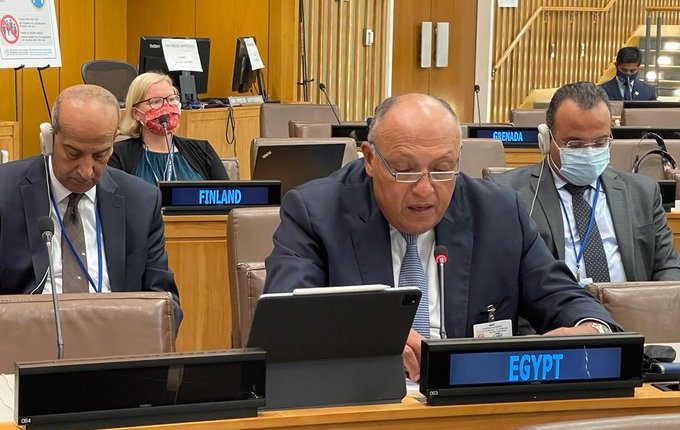 In his speech on Wednesday before the high-level meeting to commemorate the 20th anniversary of the adoption of the Durban Declaration and Program of Action, he indicated that the phenomenon of racism targets people of African descent, Arabs, Muslims, immigrants, and asylum seekers in the countries receiving them.

He said that some wrong policies and elements of political discourse continue to form stereotypes about people of ethnicities, or followers of certain religions, and link them to some criminal behaviours, in a way that contradicts the values ​​of democracy, equality and respect for others, as well as violating the peremptory rules of international law regarding the criminalization of racism.

Shoukry stressed the urgent need to take decisive steps to criminalize racism in its various forms, to take effective measures to ensure accountability, and to intensify societal awareness of the dangers of this phenomenon.

He called for strengthening national institutions competent to combat it, within the framework of comprehensive national plans, in partnership with the civil society, the private sector, and the media.

“It is time for this phenomenon to disappear from our world,” he said.

He stressed the need to build on the human values ​​we share, instead of constantly focusing on differences and tireless attempts by some to impose visions and concepts that do not conform to the cultural and religious peculiarities of many societies.

“Difference is the source of the richness of societies, and the international community as a whole,” Shoukry noted.

He stressed the need to expedite the completion of the supplementary standards document for the International Convention on the Elimination of All Forms of Racial Discrimination (ICERD), in a way that contributes to completing the legal structure at the international level to avoid deficiencies in dealing with contemporary forms of racism.

Shoukry demanded adherence to the approach outlined in the Durban Declaration and Program of Action, expressing his hope that all member states share Egypt’s keenness to implement its commitments under the political declaration that was adopted on Wednesday.