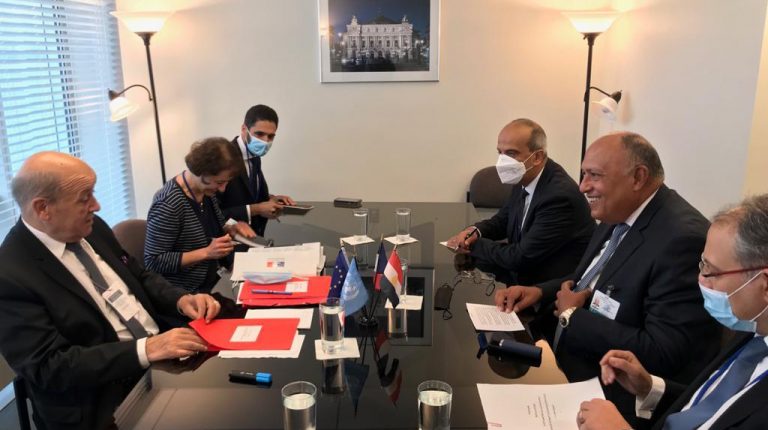 The meeting comes on the sidelines of the current session of the United Nations General Assembly. The ministers consulted on priority regional and international files on both sides.

Earlier on Wednesday, Shoukry met Irish Minister of Foreign Affairs and Defense Simon Coveney to discuss bilateral relations and ways to advance them.

The two ministers also discussed a number of international and regional issues of common concern, in order to coordinate in light of Ireland’s current presidency of the Security Council.

Moreover, Shoukry met his counterpart in Saint Kitts and Nevis, Mark Brantley. They signed a joint statement to announce the establishment of diplomatic relations between the two countries.

The two sides held a meeting to discuss ways to activate bilateral relations between the two countries, and to coordinate efforts and positions in international forums.

On Tuesday, Shoukry met with the High Representative for Foreign Affairs and Security Policy of the European Union (EU), Josep Borrell.

Shoukry and Borrell discussed ways to advance various files of cooperation between Egypt and EU within the framework of following up on the results of Shoukry’s recent visit to Brussels last July, in connection with the existing partnership between Egypt and EU.

Minister Shoukry stressed the importance of expanding the scope of cooperation in the coming period to achieve the interests of both sides, with the importance of pushing forward to encourage increased European investments in Egypt, especially in light of the distinguished investment climate provided by Egypt and the expansion of the Egyptian market.

The meeting also touched on all regional and international files that represent priorities for both Egypt and EU, especially with regard to the developments of the Palestinian cause, as well as the Grand Ethiopian Renaissance Dam (GERD) file.