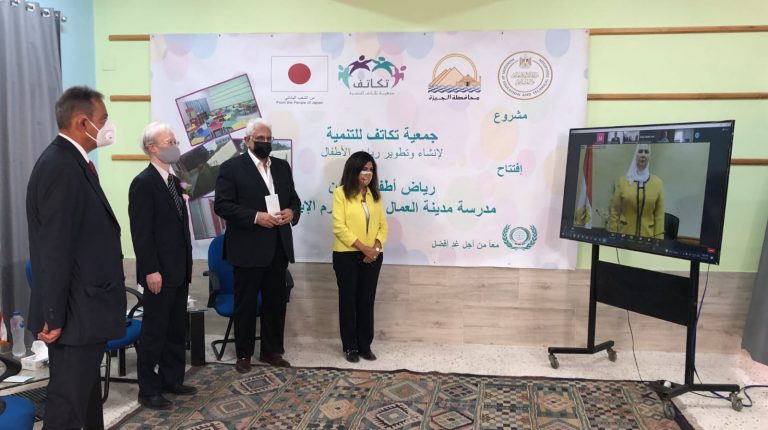 Noke Masaki, Ambassador of Japan to Egypt, has witnessed the opening of new preschool classrooms at two schools in Imbaba district, Giza.

This project was executed by the Takatof Association for Development, using a Japanese grant of about $90,000. It benefits 280 children and their families by establishing a new preschool section at Madinat El Omaal School and Omar Makram School. This project is also expected to be useful for COVID-19 prevention through the improvement of the hygienic environment.

This is the third example of collaboration between the Embassy of Japan and Takatof Association for Development, after the school projects in Beni Suef in 2016 and Giza in 2018.

At the ceremony, Ambassador NOKE commended the valuable role played by Egyptian civil society organizations such as the Takatof Association. Stressing that this project is another example of the “Egypt-Japan Education Partnership” announced in 2016 during the visit by President Al-Sisi to Japan, he vowed to continue cooperation in the education sector based on the principle of human security, leaving no one behind.

The Minister of Social Solidarity expressed her appreciation for the Takatof Association and the Japanese government’s initiatives to enhance the quality of education in Egypt and acknowledged that the government and civil society should work together for the development of the country.

Japan’s Grant Assistance for Grassroots Human Security Projects provides direct financial support to non-profitable organizations including NGOs in such fields as health, social welfare, education, environment, vocational training and empowerment of women. Under this scheme, Japan has extended about $9.8m in Egypt since 1994, supporting 173 projects.