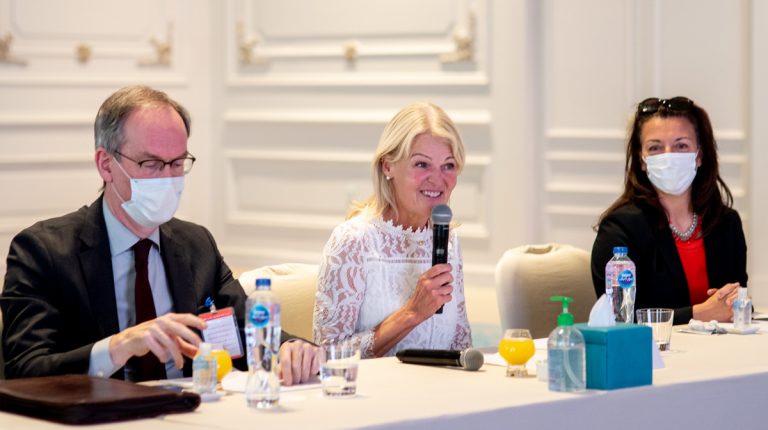 Swedish Minister for Foreign Trade Anna Hallberg has visited Egypt for two days, heading a business delegation, to take part in a series of bilateral meetings that aim to boost ongoing bilateral cooperation with Egypt.

The Swedish Minister for Foreign Trade will meet with her Egyptian counterpart to discuss means to boost economic cooperation between the two countries and possibilities of collaboration during Expo 2020 in Dubai, among other issues of common interest.

Hallberg will also meet Egypt’s ministers of Electricity and Renewable energy and Housing and Urban Communities to discuss ongoing projects and opportunities for further deepening trade and knowledge exchange between the two countries.

During the visit, the Swedish Minister will be heading a business delegation to the New Administrative Capital to learn more about the achievements and prospects of investment opportunities in Egypt’s urban development project.

Upon her arrival, Hallberg said, “The ambitious plans for Egypt’s economic development provide significant investment opportunities for its international partners. Sweden is a committed partner to Egypt, and Swedish companies are world-leading in several priority sectors. The megaprojects represent an opportunity for great economic partnerships. Egypt’s position as a regional hub and a gateway for trade with Africa following the African Continental Free Trade Agreement draws much attention in the Swedish Business Community.”

The volume of trade exchange between Egypt and Sweden hiked by 22% in the second half of 2020. Egypt is the top trading partner for Sweden in Africa and the third largest in the Middle East.

Minister Hallberg was accompanied by some Swedish world-leading companies in several fields, such as life sciences, sustainable energy solutions, mobility, and smart cities. Swedish companies have invested significant amounts in Egypt over the last few years. Today more than 30 Swedish companies are active in Egypt, creating more than 15,000 jobs, contributing to exports and economic growth in the Egyptian economy.