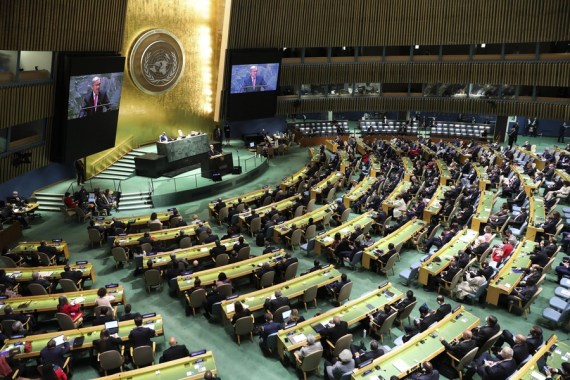 The UN General Assembly on Wednesday adopted a political declaration on the fight against racism at a high-level meeting to mark the 20th anniversary of the adoption of the Durban Declaration and Programme of Action.

The political declaration reaffirms that the Durban Declaration and Programme of Action and subsequent documents provide a comprehensive UN framework and solid foundation for combating racism, racial discrimination, xenophobia and related intolerance, and reaffirms member states’ commitment to their full and effective implementation.

It acknowledges with deep concern the rise in discrimination, hate speech, stigmatization, racism, systemic racism, stereotypes, racial profiling, violence, xenophobia and intolerance, both in-person and online, directed against, among others, Africans and people of African descent, Asians and people of Asian descent, indigenous peoples, Roma and persons belonging to other racial, ethnic, linguistic or religious minorities, as well as motivated by prejudices against persons based on their religions or beliefs, such as Islamophobia, anti-Semitism and Christianophobia, and against women and children, migrants, refugees, forcibly displaced persons, asylum seekers, internally displaced persons, persons with disabilities, older persons, youth and other persons in vulnerable situations.

It notes with concern the disproportionate impact of COVID-19 on the existing inequalities within societies and regrets that persons belonging to racial and ethnic minorities and to other groups, including Asians and people of Asian descent, especially women and girls, have been victims of racist violence, threats of violence, discrimination and stigmatization.

The political declaration vows to pursue the common goal of ensuring the effective enjoyment of all human rights and fundamental freedoms for all, while continuing to promote respect for human rights and to enhance democratic governance, the rule of law, independent judicial institutions and the fight against impunity nationally and internationally.

It reiterates that the primary responsibility for effectively combating acts of racism, racial discrimination, xenophobia and related intolerance lies with states and affirms that, whenever such acts occur, they must be condemned and their reoccurrence prevented, and urges states to take appropriate preventive measures, including legislative measures, in this regard.

It aims to ensure that people of African descent have full access to effective protection and remedies through the competent national tribunals and other state institutions against any acts of racial discrimination, and the right to seek from such tribunals just and adequate reparation or satisfaction for any damage suffered as a result of such discrimination.

It calls on all states, the UN system and international and regional organizations, and invite all relevant stakeholders to fully commit themselves and to intensify their efforts for the elimination of all racism, racial discrimination, xenophobia and related intolerance, and to continue cooperation with all relevant UN human rights bodies.

It reaffirms member states’ strong determination to mobilize political will at the national, regional and international levels and to accelerate momentum to make the fight against racism, racial discrimination, xenophobia and related intolerance, and the protection of the victims a high priority.