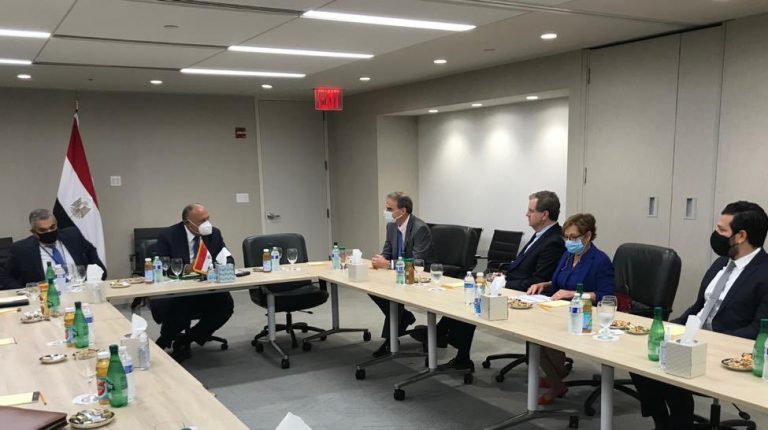 Egypt’s Minister of Foreign Affairs Sameh Shoukry has met with a delegation from the American Jewish Committee (AJC), in which he affirmed the depth of strategic relations with the United States.

This meeting came on the sidelines of the United Nations General Assembly meetings in New York on Saturday.

Shoukry also expressed Egypt’s aspiration to continue strengthening cooperation with the US in various political, economic, development, and investment fields.

He also reviewed Egypt’s vision towards the most prominent issues in the region, and its tireless move to revive the peace path, in order to achieve comprehensive peace and stability in the region.

Moreover, Shoukry met with his Algerian counterpart Ramtane Lamamra, in which they discussed bilateral relations and coordination on various regional issues.

The meeting dealt with an initiative to resume the work of the Libya Neighborhood Committee, in order to support the country’s stability and sovereignty in accordance with Security Council resolutions and the outcomes of the Libyan Dialogue Forum and the Berlin Conferences 1 and 2.

Shoukry said, “Egypt and Algeria will continue to closely coordinate to achieve this goal,” expressing his hope that the Libyan people will emerge from this crisis soon.

In his participation in the meeting of the neighbouring countries of Libya, on Friday, Shoukry referred to the role entrusted to these countries in supporting a comprehensive settlement that preserves Libya’s capabilities and preserves its sovereignty away from any interference.

Earlier on Saturday, Shoukry met with his Armenian counterpart Ararat Mirzoyan to discuss aspects of the distinguished historical relations between the two countries, in addition to exchanging visions on issues of common concern.

Meanwhile, Shoukry met with his Brazilian counterpart Carlos Franca, in which they discussed ways to enhance bilateral relations between the two countries, and joint cooperation on regional and international issues within the framework of Brazil’s non-permanent membership in the Security Council for the years 2022-2023.