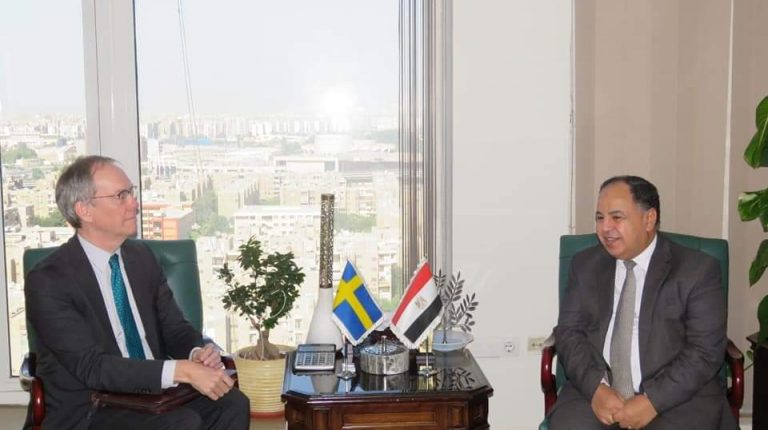 Minister of Finance Mohamed Maait has said that the government is keen on creating an attractive climate for local and foreign investments in various fields.

He added that there is a timetable for completing the update and automation of the tax and customs systems by 2022, which will eventually contribute to stimulating investment and strengthening governance. Moreover, efforts are made to integrate the informal economy into the formal economy.

During his meeting with Swedish Ambassador Hokan Emsjord and his accompanying delegation, Maait said that the Egyptian government is keen on maximizing the contributions of the private sector in the comprehensive and sustainable development process. The private sector is deemed an engine of economic growth, and a major source of job creation. He also pointed out the great role of private sector companies in implementing development projects and mechanizing taxes and customs.

Maait alluded to the projects implemented to raise the efficiency of the infrastructure, and the promising opportunities the Egyptian market represents for investors, as well as the possibility of making it a base for exporting to many African, Arab and European markets. This would include benefiting from the free trade agreements concluded by Egypt in the continent and regionally.

For his part, Hokan Emsjord, the Swedish ambassador in Cairo, said that the Swedish business community is aware of the positive developments in the investment climate in Egypt. Furthermore, many Swedish companies are keen on exploring investment opportunities in Egypt, in addition to major Swedish companies that are already operating in the Egyptian market.

The two parties discussed the possibility of revitalizing the Swedish tourism movement to Egypt during the coming period, as well as activating and reinforcing cooperation in the field of information technology, and providing opportunities for establishing a dialogue between the ministries of finance in the two countries to discuss global economic developments and their effects, and exchange experiences in the field of financial policies.