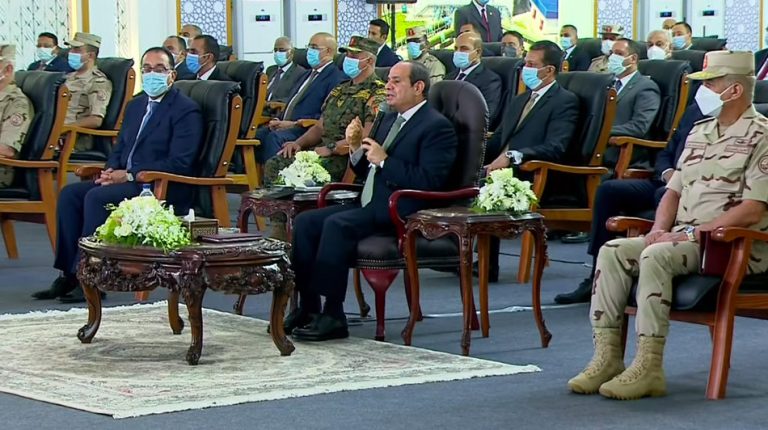 Egypt’s President Abdel Fattah Al-Sisi asserted, on Monday, that the quality and efficiency of irrigation systems must be improved in light of the limited water resources in the country.

Al-Sisi’s remarks came during the inauguration ceremony of the water treatment plant of Bahr El-Baqar, the largest of its kind worldwide, on Monday.

Al-Sisi said that the Bahr El-Baqar water treatment plant was financed through loans from Arab funds with low interest and long-term payment plans.

The President asserted that abusing practices regarding water resources violation in agricultural lands will be confronted decisively.

Al-Sisi said that the volume of water that reaches Egypt is not much and will not change, stressing the need to improve the quality and efficiency of Egypt’s water and irrigation system.

Al-Sisi confirmed that the Egyptian state is racing against time to develop, modernize and restore water facilities, calling upon the citizens to fulfill their role in preserving the agricultural land.

The President directed the Ministry of Interior, the Armed Forces and the governorates to remove all encroachments on the agricultural land within only six months.

Moreover, Prime Minister Mostafa Madbouly delivered a speech, noting that the project is a distinctive model as it serves Sinai to achieve development that it missed.

The triple-treated water from the Bahr El-Baqar plant will be transferred to the lands of North Sinai to contribute to the reclamation of 400,000 feddan.

The plant is one in a series of national projects implemented to develop Sinai and enhance the optimum use of water resources in the country.

Madbouly said that the state is expanding in development projects, indicating that the new city of Ismailia is a model for new cities, and it includes 52,000 housing units.

He asserted that the state is paving the way for the private and civil sectors to implement development projects in Sinai.

Madbouly pointed out that the state has established a large number of universities and schools in Sinai to provide a distinguished educational service, explaining that the state began to exploit the natural resources in the Suez Canal and Sinai.

The Prime Minister pointed out that gas and oil lines were developed in Sinai to serve development and investment projects.

Madbouly indicated that the investment cost of developing Sinai amounted to EGP 700bn, explaining that a network of roads and axes has been implemented to connect Sinai with the mainland.

During the inauguration ceremony, Minister of Agriculture, Elsayed Elkosayer, said that providing non-traditional sources of water is one of the most important means to confront the limited water resources.

He confirmed that there is an accelerating global interest towards the development of the agricultural sector, especially after the changes demonstrated by the coronavirus (COVID-19) pandemic for its role in providing the basic needs of people, enhancing food security, and improving nutrition.

He asserted that the agricultural sector has witnessed a renaissance and unprecedented support from the state during the past seven years, aimed at achieving food security and increasing the competitiveness of Egyptian exports, reducing the import gap, providing many job opportunities, and achieving balanced and sustainable development.

Elkosayer added that the agricultural sector contributes about 15% of the GDP, achieves a positive growth rate of 3.7%, and absorbs more than 25% of the total workforce, and Egyptian agricultural exports during the past year amounted to 5.2 million tonnes, with a cost of $2.2bn.