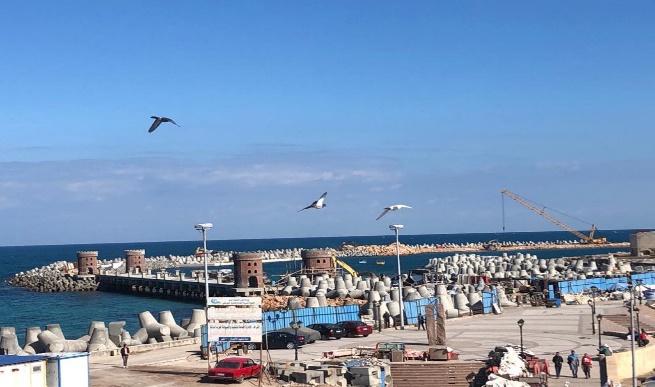 The Egyptian Public Authority for Shore Protection (ESCWA) has reviewed its work through the implementation of several major projects aimed at protecting 3,000 km of the Egyptian coasts and securing individuals, facilities, public and private properties, roads and investments.

In a statement on Sunday, the Minister of Water Resources and Irrigation Mohamed Abdel Aty stated that the aim of implementing these projects is to confront the effects resulting from climate change, and to stop the decline of the beach line in areas that suffer from severe erosion factors.

He added that the ministry’s measures aim to recover beaches that were lost due to erosion and protect the agricultural lands located behind the protection works.

For these purposes, the authority has implemented several protection projects in the city of Alexandria to protect the Corniche, Qaitbay Castle, the archaeological sea wall of the fish ponds in Montazah, the city of Ras El Bar, and the scaffolding area in front of the naval forces in Abu Qir Bay.

Additionally, the Irrigation Ministry has launched the project for “Enhancing Climate Change Adaptation in the North Coast and Nile Delta Regions of Egypt project (ECCADP)”, with the aim of establishing protection systems with a length of 69 km in the lowlands of the Nile Delta coasts in five governorates.

The project also includes establishing early warning stations on various depths within the Mediterranean Sea to obtain data related to storm, waves and sudden natural phenomena. The project work is scheduled to be completed in 2024, and so far, about 70% of the project’s work has been completed.

In 2019, the Ministry of Irrigation succeeded in obtaining a $2m grant from the Green Climate Fund last year for the ECCADP.