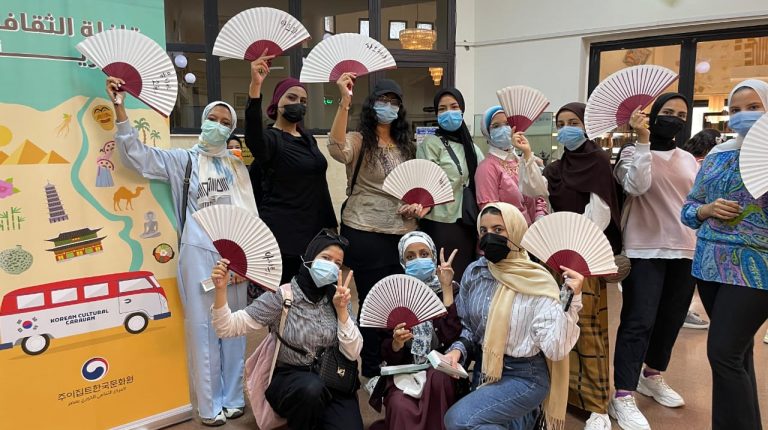 In order to promote cultural exchange between Egypt and South Korea, the Korean Cultural Centre held an event at the Misr Public Library in Port Said, under the title “Korean Culture Caravan”, on Sunday.

The Caravan included an exhibition of Korean traditional culture, food, two film screenings “Birthday” and “Honest Candidate”, a painting workshop, and three lectures on the basics of Korean language.

Mamdouh Al-Tabei, Director of Misr Public Library in Port Said, expressed his happiness for holding the Caravan, noting that there is a wide popularity of Korean culture in Port Said.

He appreciates all cooperation programmes between the library and the Korean Cultural Centre, saying “we are looking forward to organizing Korean language courses in Port Said.”

The Korean Cultural Centre launched its first caravan in 2017 but was suspended in 2020 due to COVID-19. In light of the stable health situation in Egypt, it was reorganized in Port Said, which was chosen this year as the capital of Egyptian culture.

The Centre plans to organize more cultural caravans in many Egyptian provinces to provide glimpses of traditional and contemporary Korean culture in order to strengthen mutual understanding between the peoples of the two countries. The attendees, some of them from other distant cities, praised the Culture Caravan.