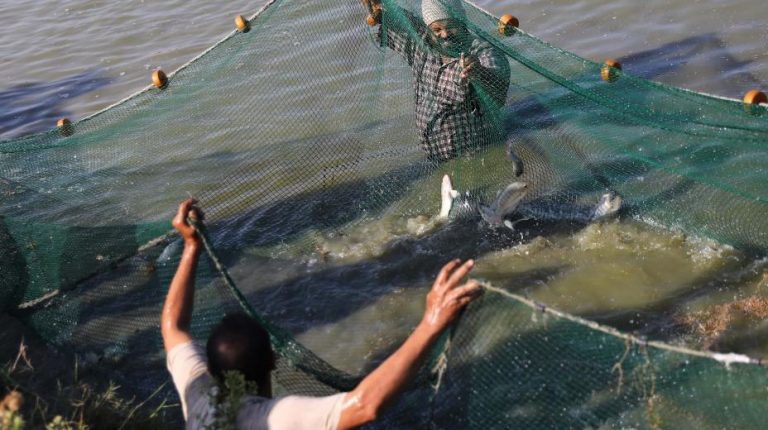 At a massive Egyptian fish farm in an open field with dozens of ponds of different sizes, fishermen were spreading their nets to collect the Nile tilapia fish and sort them out for sale based on their size, returning those too little back to ponds for further growth.

The research ponds belong to the Central Laboratory for Aquaculture Research (CLAR), which is based in Sharqia province in northeastern Egypt and belongs to the Agricultural Research Center of the country’s Ministry of Agriculture.

CLAR does not only help aquaculture and pisciculture in Egypt with researches and studies conducted on its research ponds, but it also boosts the fish production in Egypt through its production ponds, including 160 large ponds stretching on an area of nearly 1,200 feddans (over 5 square km).

“CLAR helps increase Egypt’s fish production via applied research, through which our researchers conduct studies to boost production, such as finding cheaper but efficient types of fish feed, which represents a high cost in fish farming,” said Amira el-Hanafy, director of the aquaculture research lab.

She continued that CLAR’s researchers also help with finding new breeds of fish with fast growth and high reproduction rates, which also serves the overall fish production in Egypt.

“Egypt’s annual fish production amounts to 2.2 million tonnes, 80 percent of which is produced through fish farming,” CLAR chief told reporters near one of the large production ponds.

“Now we have been fishing the little ones, whose weight have reached about 25 or 30 grams, then we move them to the production ponds to take their production period,” the production farm manager explained.

For his part, Osama Abdel-Rahman Saleh, chief researcher at the department of fish health and care, noted that CLAR rents all the 160 large production ponds to investors to use the money for research and development while the ponds still belong to CLAR in the end.

“We provide the investors with technical support and help them if they need any consultation, whether related to preparing the ponds, the irrigation, the drainage, the farming, etc.,” Saleh said at the farm

He noted that the production ponds produce between 4 and 5 tonnes per season, which spans from April to November.

“The production is mostly Nile tilapia, because it grows fast, endures environment conditions and it’s the most popular fish in Egypt,” Saleh noted.

At one of the corners of the farm, around the research ponds, a multi-purpose greenhouse with 28 small concrete nursery ponds serves as a hatchery to provide CLAR with its own fry and fingerlings of Nile tilapia to be later moved to production ponds for fish farming.

Opposite to the farm, the administrative building and the laboratories of CLAR’s different research departments are located in a spacious manor-like fenced premises.

The building includes an analysis and studies unit, a biotechnology lab, an instrumental analysis lab, a microscopic examination and histology lab and a water quality and feed analysis lab, besides a conference hall and a dormitory.

“When a fish farmer complains of something wrong, we take a sample of water and another of soil from his ponds to test them, find the problem and help him with the solution,” the researcher explained.