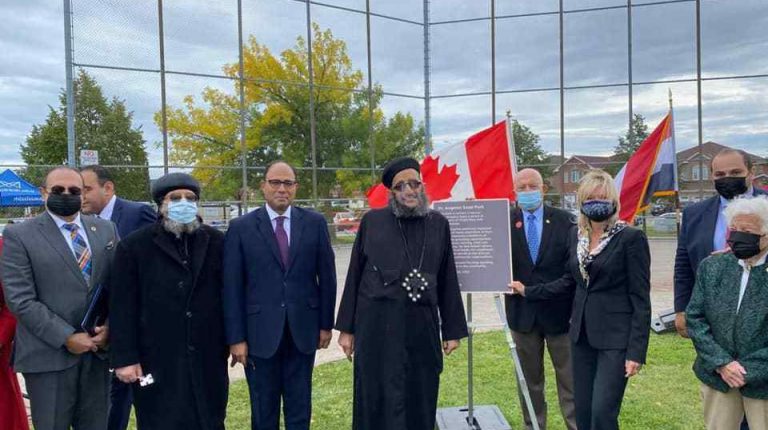 Egypt’s Ambassador to Canada Ahmed Abu Zeid, has participated in the celebration held by the Mississauga city council in the Greater Toronto Region to honour Archbishop Angelos Saad, the pastor of the Coptic Orthodox Church “The Virgin and Anba Athanasius”.

In appreciation of his dedication to serve the followers of the Coptic Orthodox Church and Canadian society for nearly 40 years, the city council renamed famous Fallingbrook Park after Archbishop Angelos Saad.

Abu Zeid delivered a speech during the celebration, in which he stressed that Saad is a model of giving and serving the community.

He is an honourable example of the ability of Egyptians abroad to integrate into their new societies and actively participate in development there, especially the Egyptian community in Canada, which has been able over decades to enrich the Canadian culture and society with various contributions.

Abu Zeid added that it is a matter of pride for every Egyptian to hear the words of praise from the Mississauga City Council and its mayor, for the contributions of the Egyptian community to the reconstruction of the city over many decades, and to the development and renaissance of the entire state of Canada, not just the Toronto region and its suburbs.

Saad began his service as a priest in the Anba Takla Church in Alexandria, and then moved to serve in Canada, where he established many childcare homes, schools, and charity and food funds, in addition to founding the Museum of Pharaonic Civilization in Mississauga.