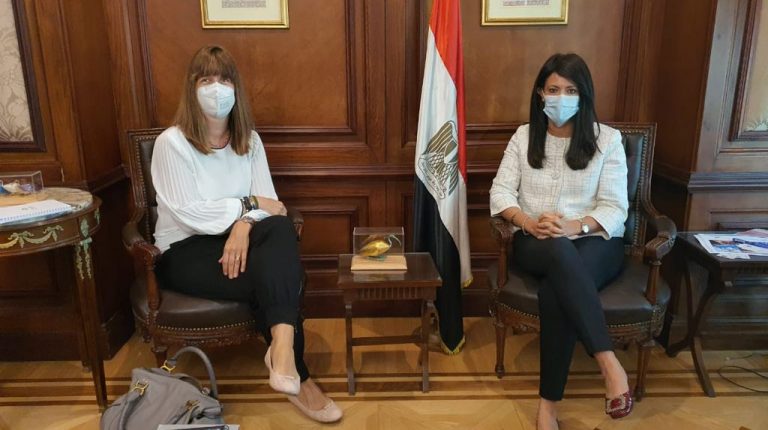 Rania Al-Mashat, Egypt’s Minister of International Cooperation, has met with Heike Harmgart, Managing Director of the European Bank for Reconstruction and Development for the Southern and Eastern Mediterranean (SEMED), to follow up on the ongoing negotiations to prepare for the new country strategy for 2021/2026.

The meeting also tackled the outcomes of the workshops that have been recently convened with stakeholders and representatives of various governmental bodies to prepare for the country strategy in line with the national development priorities.

Both sides agreed on a number of activities during the coming period, including the preparation of a high-level workshop to reach a consensus on the course of action during the next five years. The meeting also touched on the ongoing partnerships for this year with the EBRD, especially the Bank’s role in stimulating the private sector and enhancing its participation in development efforts through the provision of development financing.

Al-Mashat underscored the strategic partnership between Egypt and the EBRD that aims at integrating both the public and private sectors into development interventions, indicating that- besides being one of the founding countries of the EBRD-Egypt  now stands as one of the Bank’s largest countries of operations; side by side promoting financial inclusion, women’s empowerment, and digitization.

The Minister further stated that the negotiations with the EBRD will include all concerned national authorities to ensure that the priorities for each sector are secured; elaborating that the Ministry will work on follow-up and coordination with regards to negotiations to set forth a future strategy that achieves Egypt’s aspirations towards comprehensive and sustainable development and green transformation.

Harmgart expressed her content at launching the negotiations with the Egyptian Government to prepare the 2021/2026 strategy to carry on with the Bank’s role in supporting Egypt’s Vision 2030.

Harmgart referred to the historical relations between Egypt and the EBRD, as Egypt was able to carve out a niche for itself as one of the largest operations countries for the Bank in a short time, accounting for the Bank’s investments in Egypt that reached €7.4bn since 2012, 75% of which were dedicated for the private sector. Harmgart posited that these amounts are not merely reflective of the magnitude of development financing; rather they represent a solid proof of the allocation of resources to innovative development partnerships across all sectors.

Harmgart articulated the role of The Ministry of International Cooperation, represented in conducting several negotiations with other development partners to prepare future strategies, commending Al-Mashat’s commitment to coordinating and harmonizing different strategies to elicit the required support for national development efforts through joint action.

The Ministry of International Cooperation has launched governmental negotiations with the EBRD over the course of the past few days, addressing the preparations of the new country strategy for cooperation for the period from 2021/2026. Representatives of 17 national government institutions participated in the first round of government negotiations.

The negotiations between the Government of Egypt and the EBRD on the new strategy following the approval of the Bank’s three-fold strategy resting on: supporting the transition to a green economy and enhancing environmental sustainability; promoting equal opportunities; and accelerating digital transformation.

In 2020, Egypt was the EBRD’s largest country of operations in SEMED region, accounting for more than €1bn to finance 21 projects, which comprise 47% of the bank’s total investments in the region. Egypt was also the largest country of operations for two consecutive years in 2018 and 2019. The current cooperation portfolio between Egypt and EBRD amounts to about $1.6bn.