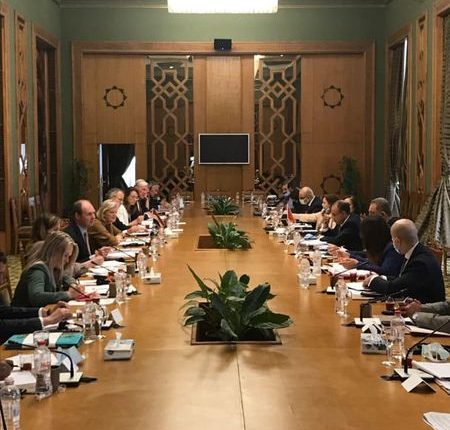 Egypt’s Ministry of Foreign Affairs hosted a session of bilateral consultations between Egypt and the Netherlands in the field of immigration and irregular migration.

The session was headed by the Assistant Minister of Foreign Affairs for European Affairs, Ambassador Bader Abdel-Aty, and Ankie Broekers-Knol, Dutch Minister of State for Immigration.

The two sides reviewed the bilateral relations between the two countries and ways to enhance and strengthen their bonds in various fields, especially in the field of immigration and irregular migration.

Abdel-Aty affirmed that holding these consultations on these issues comes within the framework of Egypt’s tireless stances and endeavors in this field and its keenness to cooperate with European countries to achieve a qualitative addition to international efforts in this file.

He referred to the great Egyptian efforts and successes in the field of combating irregular migration, most notably the fact that no illegal immigration boat has sailed from the Egyptian coast since September 2016.

He also noted Egypt’s hosting of more than six million refugees, stressing on the other hand Egypt’s readiness to provide skilled and trained Egyptian labor to meet the shortage and needs of European labor markets, including the Netherlands.

Abdel-Aty also highlighted the interest and effective cooperation of all Egyptian state agencies in order to protect its citizens from the dangers of irregular migration and human trafficking.

For her part, the Dutch Minister of State for Immigration praised the outstanding Egyptian efforts in this file,

She stressed the Netherlands’ interest in developing and strengthening cooperation frameworks with Egypt in supporting the Egyptian efforts and endeavors to combat the phenomenon of irregular migration and address the various dimensions of this phenomenon.

She indicated her country’s readiness to cooperate in the implementation of development projects to create job opportunities, and to organize training and rehabilitation programs between the two sides, as well as to enhance cooperation in the field of technical and vocational training to improve the chances of young people to obtain jobs.

Bilateral talks dealt with reference to the existing cooperation with the Netherlands within the framework of the Investing in Global Prospects program in the areas of migration, refugees, water management and development programs in general.

Abdel-Aty expressed Egypt’s appreciation for cooperation with the Netherlands in the field of refugees through the “Horizons Program: Partnership for Improving the Prospects of Forcibly Displaced Persons and Host Communities”, as well as praising the cooperation with the “National Coordinating Committee to Combat Illegal Migration.”

The bilateral consultations concluded by emphasizing the importance of intensifying joint efforts to combat the global phenomenon of irregular migration by agreeing on key elements of a draft action plan between the two sides to achieve common interests and enhance the efforts of the two countries in this field.

At the conclusion of the consultations, Ambassador  Abdel-Aty signed with the Dutch Minister of State a declaration of intent for bilateral cooperation in the field of migration and irregular migration, which included the establishment of an Egyptian-Dutch center to develop Egyptian technical and vocational skills and create job opportunities in Egypt.