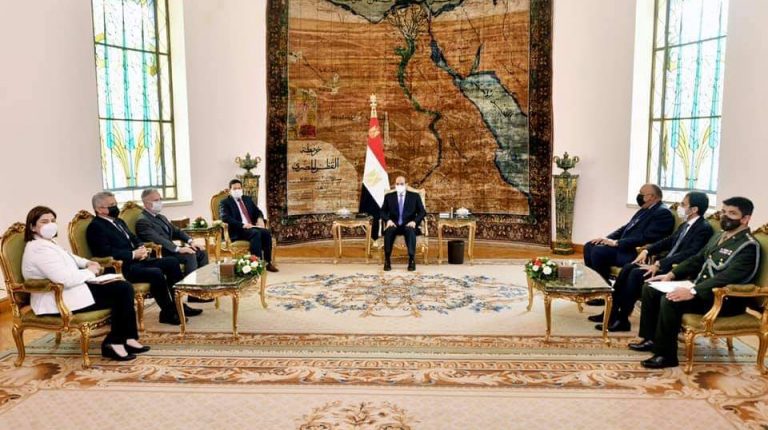 President Abdel Fattah Al-Sisi has asserted that Brazil has been Egypt’s main trading partner in Latin America, expressing his aspiration to further develop relations between the two countries in various fields.

The Brazilian Vice President conveyed the greetings of President Jair Bolsonaro, praising the tangible progress that Egypt has achieved over the past years in terms of economic reform and achieving comprehensive development.

Mourao expressed his appreciation for the strong ties between the two countries on both political and economic levels, asserting Brazil’s keenness to advance bilateral cooperation with Egypt especially in the economic, commercial and military fields.

During the meeting, both sides agreed on enhancing cooperation in various fields, especially in the military, security, commercial and economic fields, in addition to benefiting from investment opportunities available in Egypt and encouraging Brazilian tourism to the Egyptian tourist destinations.

The two sides also affirmed their keenness to continue coordination in international forums, especially in light of the two countries’ vision agreement on all international and regional issues, including the issues of disarmament and non-alignment.

They also agreed on presenting the interests and visions of the developing countries in international forums as both Brazil and Egypt are among the most influential countries in promoting regional stability.

The Brazilian Vice President was also keen to listen to the latest developments in the Middle East in light of the pivotal role of Egypt in the region to maintain regional security and stability, where views were exchanged regarding the Palestinian issue and developments in Libya and Tunisia.

The vice president has also followed up the latest developments regarding the Grand Ethiopian Renaissance Dam (GERD) issue.

Commenting on the GERD crisis, Mourao affirmed that Brazil understands the importance of the Nile River to Egypt, being the key to water and food security in the North African country.