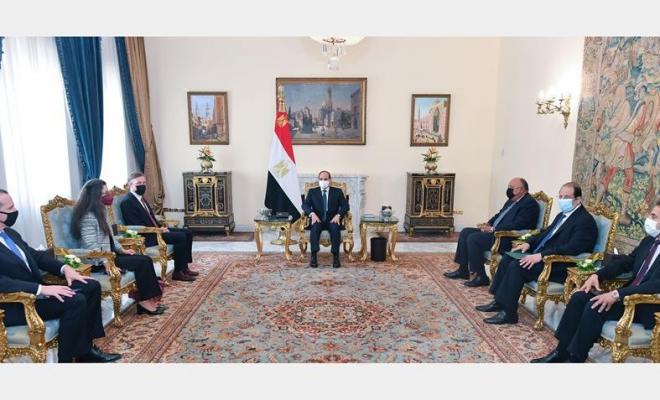 Egypt’s President Abdel Fattah Al-Sisi received, on Wednesday, US National Security Adviser Jake Sullivan, in which the former stressed the importance that Egypt attaches to the success of the political track and the removal of foreign forces from Libya.

Al-Sisi urged the necessity of holding general elections in Libya in December 2021 as previously scheduled, stressing that the effective way to achieve stability in the region is the return of countries that suffer from crises to the framework of the national state in the comprehensive sense.

Both sides agreed to intensify joint coordination and with international partners regarding arrangements related to the upcoming elections in Libya, the removal of foreign forces and mercenaries from the country, and unification of military and security institutions.

President Al-Sisi affirmed Egypt’s keenness to strengthen the strategic partnership with the US, in continuation of the course of relations between the two sides that spanned for more than 4 decades, especially at the security and military levels.

This partnership has long contributed to security and stability efforts in the Middle East, in return for the tension and turmoil it is witnessing.

The US National Security Adviser expressed the his country’s aspiration to enhance and develop the existing strategic coordination and cooperation with Egypt during the next phase, especially in light of the pivotal and balanced Egyptian role in the Middle East, which has become a key factor for the success of efforts to achieve security, stability and peace.

In this context, he praised Egypt’s effective efforts in combating terrorism and extremist ideology, and the importance of advancing cooperation between the two sides in this field during the next stage.

The meeting witnessed discussions on the overall developments of regional issues, especially the developments in Tunisia, Syria, Yemen, and Iraq.

The developments of the Grand Ethiopian Renaissance Dam (GERD) dispute were also discussed in light of the latest Security Council resolution which called on related parties to resume talks to reach a legally binding agreement on the filling and operation of GERD within a short period in a manner that achieves the common interests of all sides.

President Al-Sisi affirmed Egypt’s commitment to the path of negotiations, adding that the international community must play an influential role in resolving this very important issue, as Egypt will not accept harming or compromising its water interests.

Sullivan reiterated the US administration’s commitment to exert efforts to ensure Egyptian water security, in a manner that preserves the water and development rights of all parties.

The two sides also reviewed the developments of the Palestinian issue and ways to revive the peace process.

The US National Security Adviser expressed his country’s great appreciation for the Egyptian efforts to contain the situation in the Gaza Strip and prevent the situation from worsening, in addition to launching the initiative for the reconstruction of Gaza.

President Al-Sisi stressed that solving the Palestinian issue in accordance with international references and restoring the Palestinian people’s legitimate rights will have a great impact that will be reflected in the development and change of the reality of the entire region for the better, and opens up prospects for peace, cooperation and development.

Later on Wednesday, Shoukry held a consultation session with the US National Security Adviser, during which they reviewed joint relations and discussed regional and international issues.