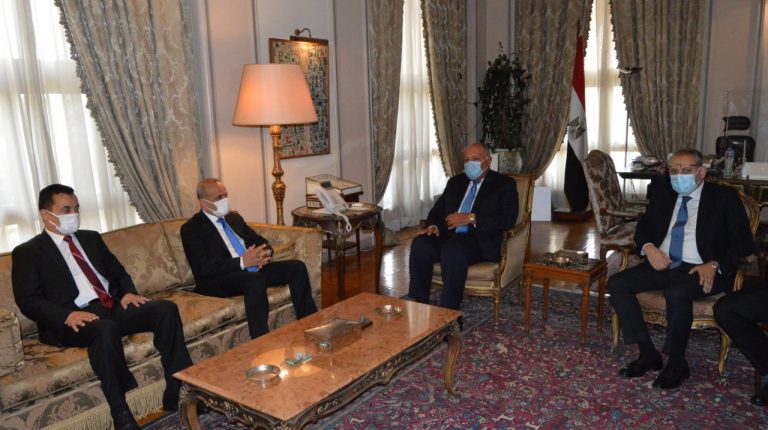 Ambassador Ahmed Hafez, the spokesperson for the Ministry of Foreign Affairs, stated that Shoukry reiterated during the meeting Egypt’s full support for Libya as an independent and sovereign state over its entire national territory.

Shoukry noted the directives of the political leadership to harness all Egyptian capabilities to help the Libyan brothers overcome the current stage, and what this requires in coordinating efforts in international forums concerned with the Libyan issue, or by building on the current momentum in bilateral relations.

Minister Shoukry also stressed Egypt’s support for the steady steps that Libya is witnessing to fulfill the political roadmap approved by the Libyans, leading to the holding of presidential and parliamentary elections on their scheduled date, as a pivotal step towards achieving the desired stability in Libya’s march for a better future.

In this regard, he praised the efforts of the Libyan House of Representatives, which led to the issuance of the presidential elections law, and its assumption of its responsibilities to implement the parliamentary elections law in coordination with the concerned Libyan parties.

During the meeting, the Minister of Foreign Affairs stressed the importance of the exit of all foreign forces, in addition to foreign fighters and mercenaries, from Libyan territory, which prevents Libya from restoring its full sovereignty, as well as its impact on the security of Libya’s neighboring countries. And the need to provide full support for the role of the 5 + 5 Joint Military Committee in the task of removing all forms of foreign presence from Libya.

For his part, Abdullah Al-Lafi expressed his country’s appreciation and pride in Egypt’s supportive role in Libya and efforts to stabilize it.

Al-Lafi praised the positive developments in the bilateral relations between the two countries, based on the extended historical and popular bonds that unite them.

He expressed the Libyans’ aspiration to continue the Egyptian role in the reconstruction and development phase in Libya in light of the extensive Egyptian experiences in this regard, and the agreements signed on the sidelines of the joint Egyptian-Libyan Higher Committee work last month.