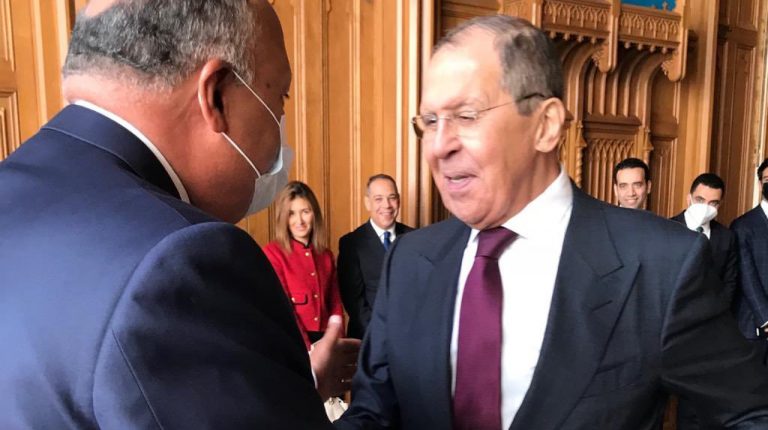 During a joint press conference with Lavrov, Shoukry said that the bilateral consultations dealt with enhancing cooperation between the two countries in the tourism and trade sectors.

Shoukry said he discussed with Lavrov the developments of several regional issues, notably in Libya, Palestine, and Syria, as well as the Grand Ethiopian Renaissance Dam (GERD) dispute.

The consultations also explored ways to maintain stability and unity of Libyan territory. Shoukry stressed the importance of holding general elections in Libya as scheduled in December, in addition to removing all foreign forces.

As for Syria, Shoukry stressed Egypt’s keenness to settle the Syrian conflict, because the Syrian-Egyptian relations have always been important for maintaining the Arab national security.

Shoukry called for full implementation of the resolution approved by the international legitimacy to achieve peace in Syria.

He stressed the need to take measures that maintain the security and stability of Syria, and to take into account its Arab surroundings and the importance of being an active part of its Arab scope.

“Egypt has always supported stability and security in Syria, and opposed anyone who violates the sovereignty, unity, and independence of the Syrian territory,” he said.

Shoukry said he briefed the Russian minister on the latest developments in the GERD issue against the backdrop of the recent resolution issued by the Security Council in this regard. He thanked Russia for its support to Egypt in addressing this issue at the Security Council.

Shoukry said that Egypt looks forward to the continuation of cooperation between the two countries in this regard, and the continuation of negotiations as soon as possible to reach a legally binding agreement on the Ethiopian dam under the auspices of the African Union (AU).

For his part, Lavrov said that his talks with Shoukry touched on Russia’s efforts to develop tourism cooperation with Egypt and increase commercial flights between the two countries, as well as strengthen bilateral investment flows.

Russia and Egypt have a common position on the Libyan crisis, Lavrov said, stressing the need to gradually withdraw foreign troops from Libya, hold elections, strengthen government bodies, and form a unified army.

Moreover, he reiterated Moscow’s rejection of attempts to politicize the humanitarian aid delivery to Syria.

The Russian Foreign Minister stressed the need to provide assistance to Syrians to overcome the repercussions of the several-year-old crisis and to work towards a political settlement on the basis of the Security Council Resolution 2254.

Lavrov noted that the terrorist threat in the Idlib area continues, and terrorist groups stationed there are attacking Syrian army units as well as Russian forces.