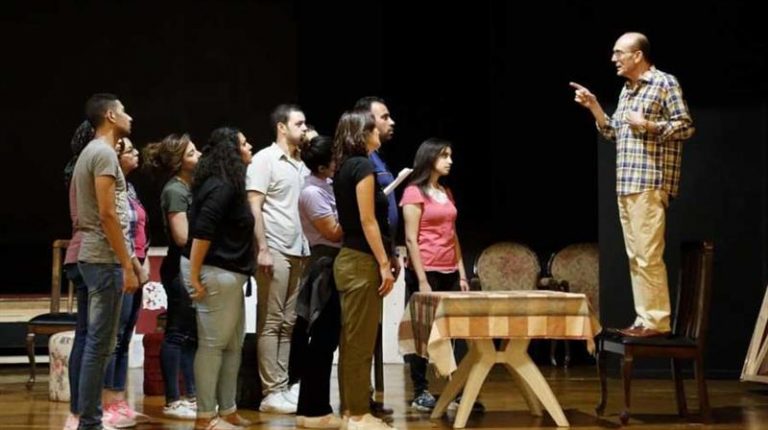 Egyptian veteran actor and director Mohamed Sobhy has launched his new play “Nogoum El-Dohr”. The play premiered last week, in the presence of dozens of prominent figures in the cultural scene.

In a press conference after the opening night of the play, Sobhy said, “Preparation for this play took the cast almost a year.” He also thanked them for their efforts in “such a different theatrical experiment.”

‘Nogoum El-Dohr’ is a musical comedy, directed by Sobhy, and discusses the daily issues of the Egyptians, featuring around 30 actors and singers from his troupe ‘Actors Studio,’ including the veteran actor Samir Abdel-Aziz. The play was co-written by Ayman Feteha and Abdallah Hassan.

Sobhy, who set a record in building theatres in Egypt amounting to five, presents ‘Nogoum El-Dohr’ at Sonbol City theatre on Cairo-Alexandria Road.

He graduated in 1970 from the Higher Institute of Theatrical Arts, starting his fruitful career in 1968. He starred in over 40 plays, 22 films, and 25 TV series, with many being among the most popular Arab classics, such as Al-Karnak (1975) and Hona Al-Qahera (1985).

He garnered a huge fan base through his few but influential series including “Sonbol” and “Yawmeyat Wanis”, which were broadcasted between 1994 and 2013, with a total of about 300 episodes.

Sobhy recently celebrated 50 years of acting by paying tribute to over 100 artists in an event titled “50 Years of Art”.