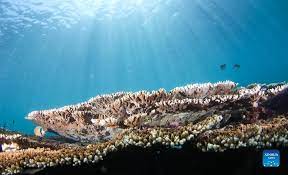 The 15th meeting of the Conference of the Parties (COP15) to the UN Convention on Biological Diversity kicks off Monday in China’s southwestern city Kunming, and expectations are high for a blueprint on preserving global biodiversity in the coming years.

Themed “Ecological Civilization: Building a Shared Future for All Life on Earth,” COP15 is the first global conference convened by the United Nations on the Chinese concept of ecological civilization.

This landmark meeting, which ends on Friday, will formulate an ambitious yet feasible roadmap for global biodiversity conservation for the next decade and possibly beyond.

Humanity stands at a crossroads with regard to the legacy it leaves to future generations. As the fifth edition of the Global Biodiversity Outlook published by Secretariat of the Convention on Biological Diversity has warned, “biodiversity is declining at an unprecedented rate, and the pressures driving this decline are intensifying.”

Therefore, the United Nations has defined 2021 as a critical year to “reset our relationship with nature,” calling on the international community to jointly cope with multiple crises including climate change and biodiversity loss.

The Kunming meeting is an opportunity to reflect on past experiences and lessons and forge a new strategy for global ecological conservation.

It is worth mentioning that China has made enormous efforts in hosting this critical conference despite a lingering COVID-19 pandemic. China’s concrete actions have demonstrated its determination to work with the rest of the world to jointly confront the biodiversity crisis.

“The kind of ambition that China has shown sort of comes to pass not only in China, but in other countries,” commented James Roth, senior vice president for global policy and government affairs at Conservation International, a non-governmental organization. “So it’s a lot of work to host one of these conferences and people expect you to come out and be a leader.”

And a leader China has been. The country has incorporated ecological civilization into its national development policy and constitution and has saved a number of species from extinction, including the golden monkey and green peacock, both of which are witnessing population increases.

China is also helping developing countries preserve biodiversity through multilateral channels such as the Belt and Road Initiative and South-South cooperation, according to China’s first white paper on biodiversity released on Friday.

China has established the Belt and Road Initiative International Green Development Coalition and launched the Belt and Road Big Data Service Platform on Ecological and Environmental Protection. Additionally, China pledged last year that it will strive to peak its CO2 emissions before 2030 and achieve carbon neutrality before 2060.

Moreover, the Chinese concept of “mountains and rivers green are mountains of silver and gold” is gaining traction worldwide.

Elizabeth Maruma Mrema, executive secretary of the Convention on Biological Diversity, said China’s philosophy of ecological civilization is “critical for all countries to achieve the global biodiversity goals.”

Through Chinese inspiration, expectations are high for a strong showing in Kunming to guide future efforts to improve biodiversity and environmental governance worldwide.