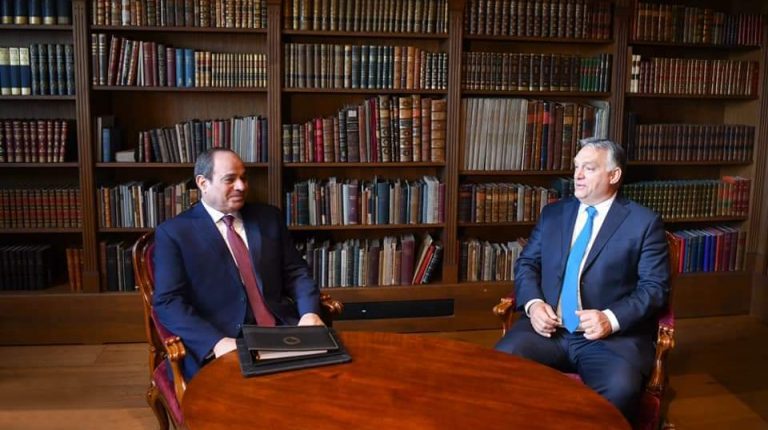 Al-Sisi’s remarks came during his meeting with Hungarian Prime Minister Viktor Orban in Budapest, on the third day of his official visit to Hungary.

Egyptian Presidency Spokesperson Bassam Rady said that the Hungarian PM hailed the close bilateral relations that link Egypt and Hungary, while affirming his country’s keenness to continue advancing those relations, especially in light of Egypt’s pivotal role as a pillar of stability, security and peace in the Middle East and Africa.

Orban praised in this regard the remarkable development boom that Egypt has been witnessing in recent years, stressing his country’s aspiration to enhance mutual investments in many sectors and maximize the volume of trade exchange between the two countries.

Rady indicated that the talks tackled various developments in regional and international issues of common interest, as the Hungarian Prime Minister praised in this regard the positive role played by Egypt in working on a political settlement for all existing crises in the region, as well as strengthening bridges of dialogue between African, Arab, and European countries.

Orban has also praised Egypt’s efforts to combat extremist ideology and establish principles and values ​​of acceptance, freedom, and tolerance.

Rady said that the views were also exchanged regarding the developments of the peace process in the Middle East.

The Hungarian Prime Minister praised the recent Egyptian efforts to consolidate the ceasefire between the Israelis and the Palestinians, and Egypt’s initiative for the reconstruction of the Gaza Strip.

The developments of the Grand Ethiopian Renaissance Dam issue were also discussed in light of the issuance of the last presidential statement of the Security Council.

Al-Sisi affirmed the commitment shown by Egypt towards the course of negotiations and that the international community has to play an influential role in resolving this very important issue that affects Egypt’s water interests.