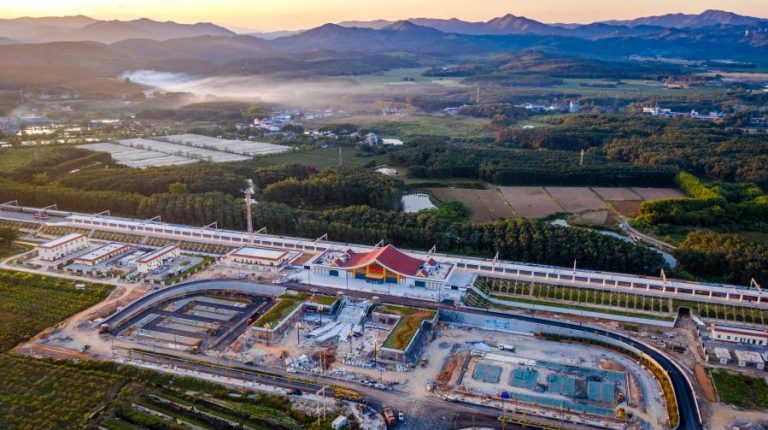 With the last steel beam laid, a railway stretching over 1,000 km from southwest China’s Kunming, capital of Yunnan Province, to Vientiane of Laos, was completed on Tuesday.

The track construction of the China-Laos railway was completed in Mengla County of the Xishuangbanna Dai Autonomous Prefecture, which is near a land port on the China-Laos border.

The cross-border railway service between the two cities is scheduled for December this year. If a train departs from Kunming in the morning, it would arrive in Vientiane in the evening on the same day, according to China State Railway Group Co., Ltd. (China Railway).

The travel between Kunming and Vientiane takes about 20 hours by car now.

This year marks the 60th anniversary of diplomatic ties between China and Laos. The China-Laos Railway is a docking project between the China-proposed Belt and Road Initiative and Laos’ strategy to convert itself from a landlocked country to a land-linked hub.

The railway runs through the India-Eurasia plate collision zone, which features crisscrossing valleys and rivers.

There are 167 tunnels along the China-Laos railway. The total length of the tunnels adds up to over 590 km, accounting for 63 percent of the railway’s total.

The major project once again showed that China is capable of building railways in areas with extremely difficult geological conditions. It is expected to stimulate regional cooperation and prosperity — a far cry from over 100 years ago, when foreigners built up a railway in Yunnan to link that in Vietnam so as to get access to Yunnan’s natural and mineral resources.

In 2015, the Chinese and Lao governments signed the railway cooperation agreement. That was when Sida Phengphongsawanh first heard about the project.

Now, the 22-year-old, born in a hilly town in northern Laos of Muangxay, is receiving training to become a China-Laos railway train driver.

Her hometown is only about 100 km from a China-Laos border gate, where the surrounding mountains block the way to China. In 2016, she went to Kunming to study railways.

“Personally, the railway has given me a stable job. At the national level, the railway can drive the multi-level and all-around development of Laos,” Sida said.

The China-Laos railway station in the Lao capital Vientiane made its debut on Oct. 6. With a construction area of 14,543 square meters, the station can accommodate a maximum of 2,500 passengers. The construction design of the station embodies the concept of “the city of sandalwood (Vientiane), the friendship between China and Laos.”

Zhang Xinjin, deputy general manager of China Railway’s Kunming bureau, said that the China-Laos railway is a scientific and technological road, which has accumulated valuable experience for railway construction in plateau and mountainous areas of China.

Based on the BeiDou Navigation Satellite System and infrared scanning technology, the railway construction control and management is smarter and more intelligent than before. It used to take two hours to set up a 500-meter guideline through human labor, but now up to 1,000 km of track-laying can be planned within one hour thanks to new technologies independently developed by China.

Zhang said the railway construction has also taken full consideration of its impact on the ecological environment, as it runs near channels of wild elephants’ migration.

“The route planning of the railway track avoids the main activity area of wild elephants and migration channels. Various measures were taken to minimize the impact on wild elephants, such as extending tunnels or building bridges for elephants to pass,” he said.