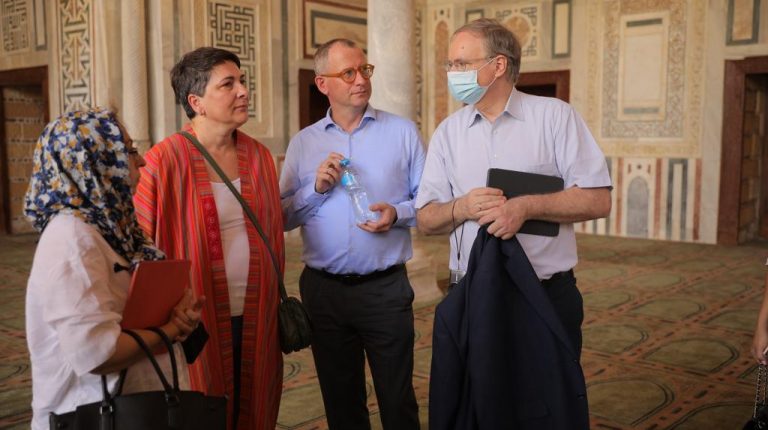 Head of the European Union (EU) Delegation to Egypt, Christian Berger, together with ambassadors of 13 European countries visited the Mosque of  Altinbugha Al-Maridani in Darb al-Ahmar neighborhood on Thursday.

The visit comes on the occasion of the completion of the first EU-financed restoration stage of the Mamluk-era mosque in cooperation with Aga Khan Foundation, under the supervision of the Supreme Council of Antiquities. The EU provided €1.2m for the mosque’s restoration over 39 months (April 2018 – June 2021).

The European officials, accompanied with their families, toured the mosque. They were briefed on the history of the mosque and its archaeological value, as well as the restoration process.

In addition, they also toured other archaeological buildings in Al-Darb Al-Ahmar, including the Khair Bek Mosque, the Blue Mosque, and the towers of Salah Al-Din Castle.

Ambassador Berger said, “We keep coming back to the Al-Maridani Mosque! This time, as promised, with EU Member States ambassadors and their families to enjoy a part of Egypt’s rich heritage newly restored with EU support.”

Berger explained that this project serves two purposes; it will revive tourism movement in the area and help commercial activities in the neighborhood boost their businesses. When the tourism movement returns hopefully very soon, after the pandemic, the project’s benefits will materialize.

“The EU-funded restoration project created employment opportunities and income for local residents and business including the training of 600 owners and employees of workshops, restaurants, and retail outlets. They represent roughly 20% of the total number of small and medium enterprises in the district. In addition, 56 tour guides received training, exceeding by far the initial target of 40,” Berger said.

He explained that this project reaffirms the EU’s commitment to conserve and promote the restoration of cultural heritage as well as the sustainable and inclusive socio-economic development of urban space.

“So as I said, it’s a combination of two things, cultural heritage, which is very important for the city, but also the people could benefit from this cultural heritage to have an income from,” he concluded.