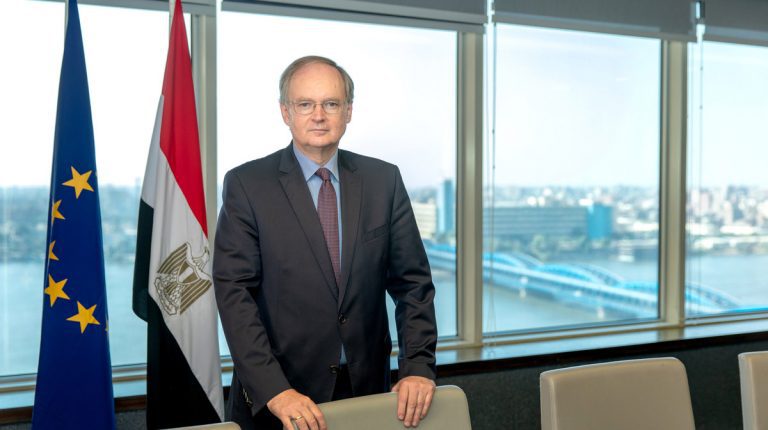 Head of the European Union (EU) Delegation to Egypt, Christian Berger, stressed that the EU position on the Grand Ethiopian Renaissance Dam (GERD) negotiations is very clear. He told Daily News Egypt that the EU believes that there should be an agreement between the countries that share the River Nile.

The cooperation between Egypt and the EU is characterised by depth in many fields. In this interview, Berger touched on this fruitful cooperation, explaining the EU’s position on some crucial issues in Egypt and the region. These include Egypt’s current dispute with Ethiopia over GERD, new partnership priorities agreement, and the newly launched National Strategy for Human Rights.

Does the EU support Egypt in its current dispute with Ethiopia over GERD?

Our position is very clear; we believe that there should be an agreement between the countries that share the River Nile, because the economic potential of the river’s basin is enormous. So, when there’s an agreement, there can also be economic development.

Having said that the EU has been clear before the statement of the UN Security Council months ago, it was also clear during the discussion of the Security Council again. Recently, Josep Borrell, High Representative of the EU for Foreign Affairs and Security Policy, made this point clear that we want to see an agreement. We are ready to provide the necessary assistance.

So we have an observer that, together with the United States, the African Union, and United Nations, takes part in the negotiations. There’s a new one that was appointed only a few weeks ago, Annette Weber, our Special Envoy for the Horn of Africa. Weber is our representative at the negotiations or the discussions about the dam, and Ethiopia. She will come hopefully, in the next few weeks, to have first consultations with the authorities in Egypt, mainly with the foreign ministry, but our position remains the same. We think an agreement is possible, and we will do everything we can to help the parties to reach this agreement.

How do you see the Ethiopian strategy of delaying the negotiations while filling the dam?

We have been following very closely with what has been happening, and therefore this is our response and position, we need an agreement.

What are the EU priority files with Egypt?

Last Tuesday and Wednesday, we had a political dialogue, so the political director of the EU was here, where we covered all aspects of our mutual concerns in foreign policy, including Libya, the Middle East, the Eastern Mediterranean, the Horn of Africa, and GERD.

The next meetings will be held by the end of October, as every year the EU organises the water week, so another one is coming. Also, the EU Commissioner for the Southern Neighbourhood will participate in Cairo’s Water Week, and will have meetings with his counterparts in the government.

Then in mid-November, Ylva Johansson, the EU Commissioner for Home Affairs, who is also responsible for migration, will visit Egypt to meet with her interlocutors.

In addition, we are at the moment discussing a new set of partnership priorities. This normally covers a period of seven years, so the ones that we are having now are just expiring in 2021, and we have to come now with new ones.

As for your question, we are discussing a new set of partnership priorities. We will discuss the cooperation on socio-economic issues, governance, rule of law, and foreign policy issues. That should then be adopted, hopefully in the next Association Council, which is at the level of ministers between the EU and Egypt. So once the negotiations are complete, then we will have this meeting.

Will the new partnership agreement with Egypt be signed before the end of the year?

We are already exchanging ideas and what should be in the partnership priorities. I do hope that we can be quick in finalising the work.

I want to add that we are negotiating at the moment with many countries in the region because many of these partnership priorities that have been negotiated in 2016 are now expiring. So it is not only Egypt; it’s Jordan, Lebanon, and other countries. So we hope that we can finalise them soon.

Will we see new priorities within the new agreement with Egypt?

Yes, as things have changed, new priorities appeared, obviously, Egypt and the EU have to respond to the coronavirus crisis. The new elements include health and production of the vaccine, environmental and green energy issues. In addition, there will be socio-economic issues.

In parallel, we are also working with the energy ministries to produce an energy strategy, which we did ten years ago. So we are updating this with a very strong focus on renewable energy [wind, solar, hydrogen].

So basically, these are the new elements that we need to take into consideration what has been happening the last seven years.

Another aspect is the digitalisation of the economy; anything has to do with artificial intelligence. I mean all these big new themes that both Egypt and the EU will have to deal with in the future. So here we try to find a way of cooperating.

Analysts say that this year witnessed a kind of competition between the UK and the EU on the Egyptian market, especially in renewable energy. What’s your comment on that?

I don’t think it’s a competition. We all have our share to contribute to this. So on our side, countries like Germany, France, and others are very interested in working in this sector [renewable energy].

How do you view Egypt’s new National Strategy for Human Rights?

First of all, we welcome that the strategy was issued. We have been discussing this for quite some time. We also had as ambassadors a good meeting with the foreign ministry. They explained the details and the strategy’s concept, and then we had a follow-up meeting with the human rights committees in the Senate and the House of Representatives, where we discussed the issues.

Our point is, we will look at it very carefully. And we are also ready to help with the implementation and legislation because many things need to be now translated into legislation. We have our own experience, which we can share. But of course, it’s up to Egypt to decide what it wants to do in the end. But we think that the launch of the National Strategy for Human Rights and the emphasis on civil society next year, as President Abdel Fattah Al-Sisi has declared that 2022 is the year of civil society, is an important aspect.

How do the EU investors see the investment climate in Egypt? And what are the obstacles that they face?

Let’s look at the advantages or attractions you have. First of all, a well-functioning infrastructure and transportation system so you can easily export what you produce here.

You have new legislation that is being passed on how to set up a company, and how to calculate taxation and customs. So, these are all very important aspects of course.

You need to look at it from the angle of someone who wants to invest. As an investor, you want to make sure that you make a profit; obviously, you want to make sure you can use this profit. So, this is very important [the financial transactions] and you don’t want too much bureaucracy. So, you want an easy procedure. The new investment law will help you have one place to go to register and complete all your paperwork. Now, I think a lot of these incentives are attracting investments.

In your opinion, what are the most promising sectors in Egypt?

Renewable energy, such as solar and wind energy.

Do you think that Egypt could be one of the superpowers in renewable energy?

I think Egypt certainly is in a very advantageous position. It has not only the resources in terms of sun and wind but also the necessary research capacity to improve that system.

How do you see the urban development in Egypt and the establishment of new cities such as the New Administrative Capital and the New Alamein?

It’s fantastic to see how quickly very modern buildings go up. I have been to New Alamein and the New Administrative Capital. We visited the museum in the new capital, the opera, and the library. We have also visited the Cabinet, the Prime Minister’s Office, and the Foreign Ministry.

So I think it’s fascinating to see how much effort has gone to build these new cities. I think it’s not only these two, but it’s also new Ismailia, New Aswan, and many other places. So I guess this will be a strong stimulus for the economy and the construction sector.

Could you elaborate on the importance of completing the first EU-financed restoration stage of the Al-Maridani Mosque?

This project serves two purposes; it will revive the tourism movement in the area and help commercial activities in the neighbourhood boost their businesses. When the tourism movement returns, hopefully very soon, after the pandemic, the project’s benefits will materialise.

The EU-funded restoration project created employment opportunities and income for local residents and businesses, including the training of 600 owners and employees of workshops, restaurants, and retail outlets. They represent roughly 20% of the total number of small and medium enterprises in the district. In addition, 56 tour guides received training, exceeding by far the initial target of 40.

Al-Tanbagha Al-Mardani Mosque was inaugurated on 30 September after the completion of the first phase of its restoration project funded by the EU with a contribution of €1.2m over a period of 39 months (April 2018-June 2021), in cooperation with the Aga Khan Foundation in Egypt, and under the supervision of the Supreme Council of Antiquities.

EU Special Envoy for Horn of Africa, who is our representative in GERD negotiations, will come hopefully in the next few weeks to have first consultations with the authorities in Egypt, mainly with the Foreign Ministry

We think an agreement over GERD is possible, and we will do everything we can to help the parties reach this agreement

In mid-November, the EU Commissioner for Home Affairs, who is also responsible for migration, will visit Egypt to meet with her interlocutors