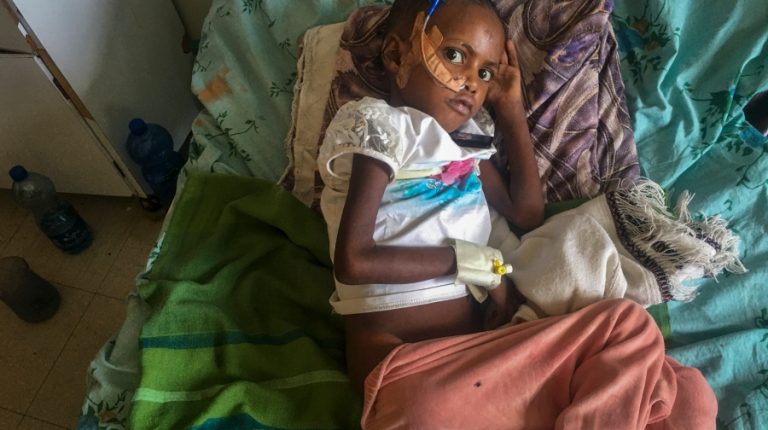 UK’s Minister for Africa Vicky Ford has announced an additional £29m of humanitarian aid to people affected by the catastrophic conflict in northern Ethiopia.

The announcement marks World Food Day today [16 October] and increases the UK’s commitment to the crisis to more than £75m – making the UK the second largest donor.

The Minister is also calling on all parties in Ethiopia to urgently agree a ceasefire to allow humanitarian aid through and for the Ethiopian Government to lift the de facto blockade of humanitarian relief into the Tigray region. The people of Tigray need 500 trucks of critical assistance per week, but less than 10% of this has been met since June.

Minister for Africa, Vicky Ford, said:
“The Ethiopian people are facing a humanitarian catastrophe and are in urgent need of support. This pledge will provide vital food, water and healthcare to the hundreds of thousands of people facing famine in northern Ethiopia.”

“This is a man-made crisis. I urge all parties to urgently agree a ceasefire to allow humanitarian aid to reach starving people,” he added.

The new funding comes as the UK’s Special Envoy for Famine Prevention and Humanitarian Affairs, Nick Dyer, recently concluded his third visit to Ethiopia since the start of the conflict in November 2020, where he pressed for improved humanitarian access to the areas affected by conflict.

Since November 2020, thousands of Tigray residents have been killed and hundreds of thousands more forced from their homes to other regions or crossing borders to Sudan, escaping from the war.

Last week, the Ethiopian army continued to launch air and ground strikes targeting Tigray militants in the Amhara region in the northern side of the country.

Aiming to gain the upper hand in an escalating armed conflict nearly a year ago, the Ethiopian forces launched a new offensive against the Tigray People’s Liberation Front (TPLF) last Saturday.

UK’s Special Envoy Nick Dyer said: “On my third visit to Ethiopia since the start of the Tigray conflict, I saw a further deterioration of the crisis and the conditions for humanitarian operations. We are pleased to provide more funding but humanitarian agencies need access into all areas where people are in need now, so that lives can be saved and catastrophic famine avoided.The conflict in northern Ethiopia has spread beyond the borders of Tigray now, so we are expanding UK funding to reach those in urgent need in Afar and Amhara.”

The funding will be delivered by UN agencies and NGOs, including the WFP, UNICEF, and the Ethiopia Humanitarian Fund. Our partners expect to deliver lifesaving nutrition treatment for more than 100,000 malnourished children, and 27,000 pregnant and new mothers.

The pledge will also deliver clean water and sanitation for 26,000 people and provide services to prevent and respond to gender-based violence for almost 3,000 women and children.

It will also support people who have been forced to flee their homes by the spread of conflict across northern Ethiopia, providing shelter, healthcare, and support to children who have been separated from their families and to survivors of sexual violence.