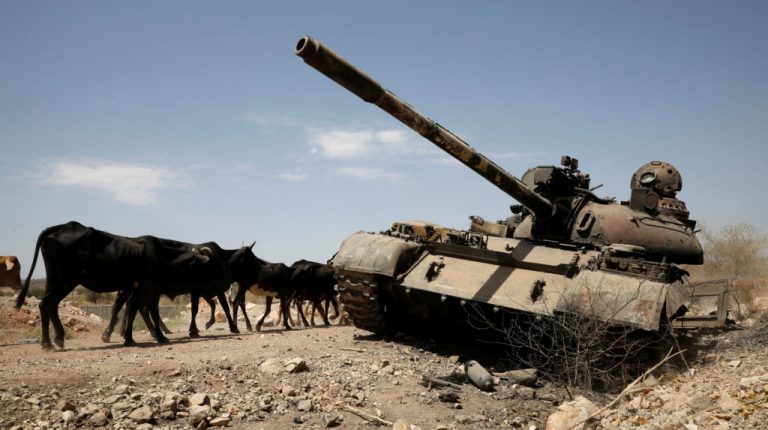 Ethiopian forces hit the capital of northern Ethiopia’s Tigray region with airstrikes on Monday, according to local media.

“Airstrike now in Mekele,” one humanitarian official in the city said via SMS to AFP on condition of anonymity, describing attacks also confirmed by a second humanitarian source, two diplomats and a rebel spokesman.

Tigrai TV indicated that the airstrikes were carried out by the forces of the Ethiopian Prime Minister “Abiy Ahmed”.

In early October, the Ethiopian army continued to launch air and ground strikes targeting Tigray militants in the Amhara region on the northern side of the country.

Aiming to gain the upper hand in an escalating armed conflict nearly a year ago, the Ethiopian forces launched a new offensive against Tigray Defence Forces 10 days ago.

TPLF Spokesperson Getachew Reda tweeted: “Abiy Ahmed’s ‘Air Force’ sent its bomber jet to attack civilian targets in & outside Mekelle. Monday is market day in Mekelle & the intention is all too palpable. While they are losing big in what they dubbed as a final offensive against Tigray, they will obviously continue to target civilians in a desperate move to exact revenge on the people of Tigray. One of their targets was the Planet Hotel where a dozen or so Humanitarian Agencies used to have their employees. Apparently the authorities in Addis are in the know about UN Ethiopia’s recent decision to move most of its workforce out of Mekelle & Tigray. Whatever the connections there, however, our people won’t be cowed into submission by a desperate move by a desperate regime teetering on the brink of collapse.”