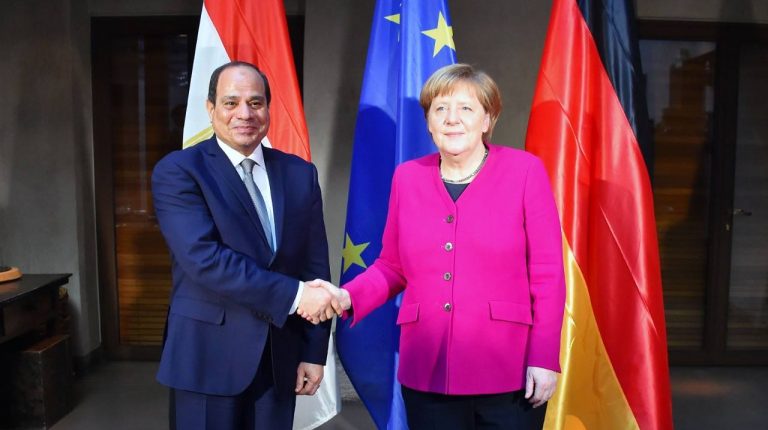 Merkel expressed her appreciation for the growing and fruitful cooperation with Egypt during the past years. She affirmed her country’s pride in its extended ties and close relations with Egypt, and its keenness for Germany to continue strengthening those relations and supporting Egyptian development efforts in the future.

Al-Sisi also expressed Egypt’s appreciation for the great contribution Germany has made since Merkel assumed her position in strengthening relations between the two countries.

He also wished her all success after the end of her term in the German chancellery, and stressed Egypt’s aspiration for the continuation of the distinguished level of cooperation with Germany at all levels.

The meeting witnessed discussions on ways to enhance the various bilateral cooperation frameworks between the two countries in all fields, especially with regard to promoting trade exchange and tourism, in addition to combating the repercussions of the coronavirus pandemic.

Topics of education and character building for new generations of students were also discussed, as well as cooperation in the field of new and renewable energy.

The two sides also praised the close partnership between Egypt and several German companies, which witnessed the implementation of huge and unprecedented projects in various fields. They stressed the importance of expanding economic cooperation to include other sectors.

The meeting also touched on a number of regional files of common interest, especially the Libyan crisis.

Both leaders stressed the need to continue intensive consultation on this important file between the two countries, taking into account the vital role of Egypt in the framework of working to settle this crisis once and for all.

The two sides agreed on the need to move forward in the political process in Libya, including the general elections next December, as well as the removal of all foreign forces and terrorists from the Libyan territory.

They also exchanged views on the developments of the Palestinian issue; in which Al-Sisi reviewed the Egyptian efforts to consolidate the ceasefire in Gaza and rebuild the strip.

Al-Sisi also reviewed Egypt’s efforts at the bilateral and international levels to revive the peace process between Palestine and Israel by resuming peace talks on the basis of international references.

Both leaders discussed the latest developments in the Grand Ethiopian Renaissance Dam (GERD) issue, in which Al-Sisi affirmed the Egyptian position in this regard, which aims at reaching a legally binding agreement on filling and operating the dam, in light of the UN Security Council resolution in this regard.