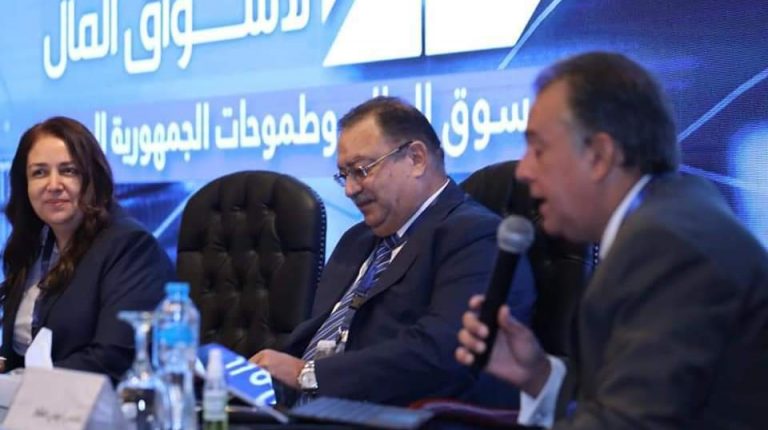 The opening session of the Capital Markets Summit discussed capital gains tax and their impact on the market. The summit tackled the hot topics of the Egyptian capital markets, how the Egyptian Exchange can accommodate the state aspirations by offering large public companies such as the Administrative Capital For Urban Development (ACUD). It also discussed the role of capital markets in financing the state’s general budget projects.

Assistant Finance Minister for Economic Affairs Sherine El-Sharkawy said that the ministry is adopting a strategy of expanding the base of investments in every field. She added that this aims to create sufficient funding sources at the lowest cost to finance state projects and achieve the aspirations of the new republic towards a decent life for citizens.

During her speech at the opening session of the annual Capital Markets Summit, she added that the ministry has been working on increasing the economic growth rate, as well as creating long debt terms to improve and expand options for investors in debt instruments such as local bonds and bills.

She pointed out that the ministry succeeded in structuring the yield curve that reflects various risks, in conjunction with successfully working to reduce the cost of debt.

“In light of the pandemic, the ministry has been diversifying sources of funding by issuing bonds, which has been very welcomed in the market, with 3-fold oversubscription,” she added.

She explained that the ministry is also interested in the environmental aspect to keep pace with the great development in green finance. Accordingly, the Egyptian government issued $3m worth of green bonds.

“We expect Egypt to join the sustainability index soon due to the issuance of green bonds, especially after linking government bonds to Euroclear in large investment volumes,” she added.

On the Islamic side, it also obtained the first Islamic loan of EGP 2bn, explaining that the interest also prompted the development of the Sovereign Sukuk Law.

El-Sharkawy revealed that work is underway on the executive regulations of the Sukuk Law, pointing out that the establishment of the sovereign Sukuk company is being finalised. This comes as part of the offering of the first sovereign Islamic Sukuk before the end of the fiscal year, explaining that the interest stems from the large size of Sukuk globally, up to $3.2trn.

She explained that before the end of next January, the number of bond issuances will reach 14, with a volume of issuances exceeding $24bn, to maintain the great effort made by the ministry to join the JPMorgan bond index, as well as maintain the ratio of foreign investors in government treasury bills.

She also stressed the importance of the capital markets for the Egyptian state as a powerful means of obtaining financing for companies. El-Sharkawy pointed out that a debt instrument clearing company is currently being established.

“Capital markets play a great role in attracting foreign investments to Egypt, with e-Finance IPO being a good example of that, she added.

“The offering of e-Finance took nearly a year and a half of work. I expect government offerings to continue at this time. This goes in line with the state’s plan to offer ACUD to encourage large companies to be listed on EGX. This will in turn increase the representation of Egyptian companies in the MSCI Emerging Markets(EM) Index, which would attract foreign investment to Egypt,” El-Sharkawy stated.

Session’s moderator, Ayman Salah, asked a question about the messages that investment and economic policies send to the capital market, especially in conjunction with the government’s plan to offer its major companies.

The First Assistant Minister of Finance for Economic Affairs said that the economic and tax policies are very clear and that the application of the capital gains tax is not new to the market.

She explained that a tax of 10% will be applied to the capital profit of listed companies, as well as at a rate of 25% for individuals, and 22.5% for companies, stressing that clarity of tax policies is closer to tax justice than exemption or continued tax deferral.

On the other hand, Prime Holdings CEO and Egyptian Capital Market Association (ECMA) President Mohamed Maher said that the daily trading volume reached about $400m at the beginning of establishing the capital market after the law was issued at the end of the last century, when the government introduced the huge privatisation program for its companies, a move that boosted the capital market at the time.

He pointed out that the capital market witnessed a slowdown until 2008. He also noted that the significant decline in the number of listed companies and trading volumes was caused by the state’s reluctance to offer companies on the stock exchange, in addition to gradual increases in the costs of EGX listing.

He added that ECMA called for tax equality and justice among traders in EGX and bank depositors, taking into consideration the degree of risk for each of them.

He stressed the importance of looking at the stock market as a tool to attract investments and not just a means to increase the state’s tax proceeds.

In response to Mohamed Maher’s comment about the decline in the number of companies listed on EGX, El-Sharkawy said that the tax is not the main reason for the decline; especially that it was applied after the decline occurred. Taxes are also applied in all global markets, and discussions are ongoing about measures to be taken to stimulate EGX.

As for the impact of capital gains tax on the total outcome, she stressed that the goal is not the increase in tax proceeds. Moreover, the deterioration that occurred in the capital market came before the tax was applied and writing-off many companies, including Orange and others.