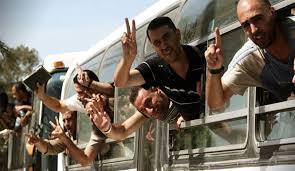 The Palestinian movement of Hamas said Monday that it is working on a new prisoner exchange deal with Israel, but it did not specify the exact timing of this deal.

The movement said that it will spare no effort to release the Palestinian detainees in Israeli, considering that their liberation is a religious, national, and humanitarian duty.

Hamas added that the prisoners issue tops its priorities, and it will not rest until those prisoners are freed, according to a statement by the Palestinian Safa News Agency.

It asserted that releasing the captured Israeli soldiers in the Gaza Strip will have no price other than releasing the Palestinian prisoners.

The movement stressed that the Israeli government must make it clear to the public that the exchange deal is the only way that can free the captured Israeli soldiers in Gaza.

Moreover, the Al-Qassam Brigades, the military wing of Hamas, issued Monday a message to the Palestinian prisoners in Israeli prisons, coinciding with the 10th anniversary of the “Wafa Al-Ahrar” deal.

It said: “The time for the liberation of the Palestinian prisoners is close.”

On 11 October 2011, Israel signed a prisoner exchange deal under the Egyptian auspices, which was called “Wafa Al-Ahrar”, where 1,027 Palestinian prisoners were released in exchange for Israeli soldier Gilad Shalit.