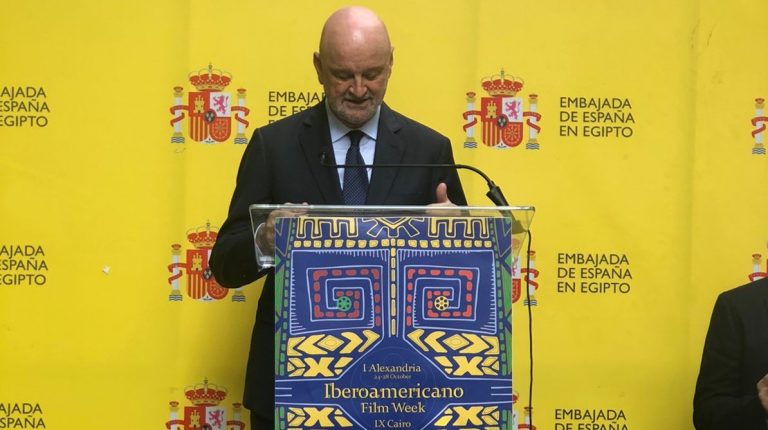 Spanish Ambassador in Cairo, Ramón Gil Casares, announced Monday the launch of the Ibero-American Film Week in Egypt, which sees the screening of various movies from Latin America, Spain, and Portugal.

Zawya Cinema in Downtown Cairo will host the ninth edition of the event from 1 to 10 November. Interestingly, Alexandria will also host the Ibero-American Film Week for the first time, from 24 to 28 October at the Freedom Center for Creativity.

Fernanda Mansur Tansini, Head of the Cultural Section at the Brazilian Embassy in Cairo, said: “I would like to express my thanks to the Embassy of Spain for the reception and all the embassies of Latin American countries and the Iberian Peninsula for their cooperation in promoting art and culture.”

Tansini continued that she hopes that through cinema and art, it will be possible to bring peoples that are geographically distant together.

Moreover, Ambassador of Mexico to Egypt, José Octavio Tripp, said that the Ibero-American Film Week was unfortunately suspended last year due to the pandemic. “But this year, thanks to the Ambassador of Spain, and the solidarity of 13 ambassadors of our colleagues, from Portugal and Latin America, we will enjoy the ninth round of this cinematic event in Cairo, and the first in Alexandria.”

He added: “After nearly 10 years of non-stop, this cinematic week has become a tradition for film lovers in Cairo and us as ambassadors.”

Through this cinematic event, he mentioned, Latin American embassies present a three-dimensional gift to the Egyptian public characterized by being democratic, diverse, and interesting. The gift is in Spanish and English.

“[It’s] ‘democratic’ because it is available to all viewers, movie lovers, and others, whether they are rich or poor, ‘diverse’ because the list of films that will be screened vary between comedy, drama, suspense, and documentaries, and ‘interesting’ because the cinema has an irresistible charm on the soul and the human mind,” Tripp explained.

During his speech, Spanish Ambassador Casares said that the embassies of Ibero-American countries would like you to join them in celebrating an interesting film programme, which reflects the essence of each of the participating countries and their strong and closely related cultural industries.

He mentioned that the Ibero-American cinema, in both Portuguese and Spanish, is very popular in Egypt. Film enthusiasts, students, and teachers are interested in attending this event, which represents a cultural bridge between Egypt and Ibero-America.

“I encourage everyone to watch the films of this session. I must point out that this activity comes within the framework of the Ibero-American Week in Alexandria that will be held from tomorrow [19 October] and will last till 28 October. This week will witness very interesting activities, we will move to Alexandria to hold meetings with the local authorities, which will be followed by a visit to the Qaitbay Citadel. Then we will have an informal lunch with representatives of the business world, and we will conclude our day with a photo exhibition entitled “Ibero-American Cities” in the Bibliotheca Alexandrina,” Ambassador Casares said.

He added that many embassies would participate in an important academic meeting at Pharos University in Alexandria, which will include professors and university students.

“Finally, we can’t forget about football, as on 24 October, the digital competition ‘Iberamerica Champions’ will be held in partnership with the Spanish La Liga,” he said. “These activities aim to familiarize the Alexandrian public with the cultural reality of the various Ibero-American countries,” Ambassador Casares concluded.