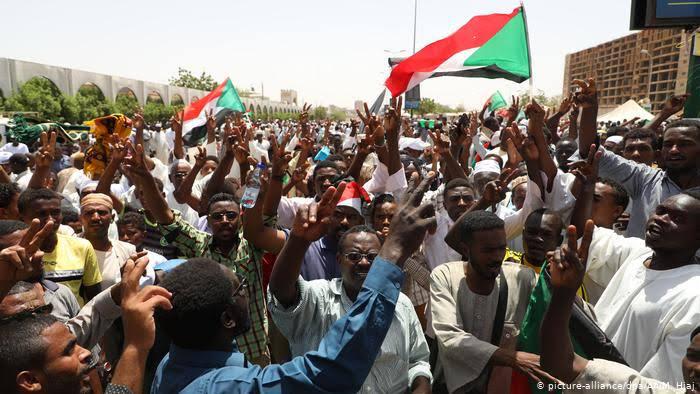 Opponents of Sudan’s transition government in Khartoum continued to protest on Monday to call on the army to take control of the country.

Two protesters in Khartoum were injured after they were beaten by the police as they tried to forcibly enter the Sudanese Cabinet.

The protesters at the presidential palace in Khartoum closed the vital Al-Gomhoria Street in central Khartoum, heading towards the Cabinet.

Meanwhile, Sudan’s Prime Minister Abdalla Hamdok’s emergency meeting with the Sudanese cabinet to discuss the current situation in the country ended without any results. He described the meeting as the “worst” since the overthrow of Omar al-Bashir in 2019.

Hamdok suggested the formation of a committee of six members representing the parties to the crisis, to be headed by him.

This came as several thousand demonstrators gathered outside the presidential palace as the country’s political crisis deepens.

They gathered in front of the cabinet headquarters in the centre of the capital, Khartoum, chanting, “Down with Hamdok.”

They also called for dissolving the government and expanding participation to include all forces of the revolution. This comes at a time when Sudan is facing the biggest political crisis in its two-year transitional period.

The military and civilians have been sharing power since the overthrow of President Omar Al-Bashir in 2019.

As tensions intensified Hamdok warned Friday that Sudan was going through the “most dangerous political crisis” in the transitional period, reiterating his commitment to leading the country towards democratic elections.

In September, the Sudanese government announced that it had thwarted a coup attempt, accusing officers and civilians linked to the Bashir regime.

Bashir was ousted by the army in April 2019, following the mass protests driven by the Forces for Freedom and Change, a civilian alliance that became a key plank of the transition.