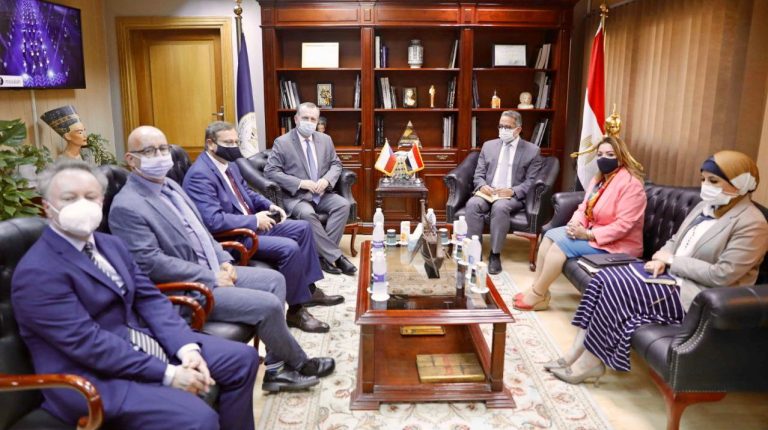 Egypt’s Minister of Tourism and Antiquities Khaled El-Anany with the Czech ambassador to Cairo Jan Volk, and Tomas Zima, President of the Czech Charles University to discuss strengthening tourism cooperation between the two countries.

The meeting was attended also by Miroslav Bárta, Vice-President of the University, Oldrich Vondrouska, the Czech Cultural Adviser, Youmna Al-Bahar, Assistant Minister for Technical Affairs, and Dalia Abdel-Fattah, General Supervisor of the General Department of International Relations and Agreements in the Ministry.

El-Anany applauded the bilateral relations between the two countries in all fields, especially the fields of tourism and antiquities.

The two sides discussed ways to enhance cooperation between the two countries to boost tourist movement from the Czech Republic to Egypt. The meeting also tackled ways of exchanging experiences and training in the field of archaeological work such as excavations and restoration.

During the meeting, El-Anany expressed his full appreciation for the confidence of the Czech government in the precautionary measures applied by the Egyptian government, as Czech tourists are among the first nationalities received by Egypt after the resumption of the incoming tourist movement in July 2020.

The Czech delegation expressed its happiness with its country’s hosting of the Kings of the Sun exhibition. They pointed out that the exhibition met with great success and demand from Czech citizens and its neighbouring European countries as well, which prompted the Czech government to request an extension to host this exhibition twice.