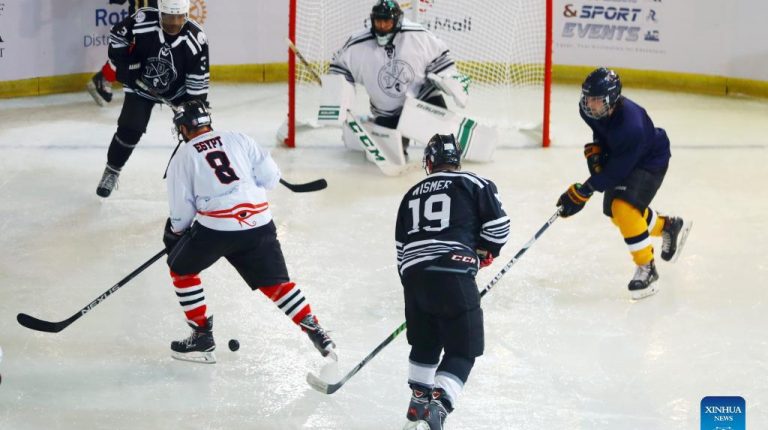 In an uncommon scene in Egypt with its warm weather even in winter, an ice hockey game was played in a venue at the entrance hall of a mall in the capital Cairo, with Egyptian and foreign players holding sticks and wearing helmets, skates and shoulder, elbow, knee and shin pads.

The game was part of a three-day ice hockey event, Egypt Ice Hockey Experience 2021 (EIHE 2021), that kicked off on Sunday evening and was organized by Egyptian and foreign ice hockey lovers to promote the sport in Egypt, which doesn’t have a federation for winter sports or an ice hockey national team.

The EIHE 2021 friendly tournament is mainly co-organized by Egypt Ice Hockey, a team of Egyptian young people mostly raised and living in Canada and the United States, as well as IBIS, an Egyptian company for business services, and the Friendship League, a Canada-based sports tourism organization.

“This event is a spotlight, or a kind of promo, for the Egyptian people to introduce ice hockey to them, which is so similar to football that Egyptians love so much,” said Nancy Abdel-Hadi, co-organizer and head of IBIS, noting that the slogan of the event is: “Promoting winter sports in the country where the sun always shines.”

Scott Howe, a representative of the Friendship League and co-organizer of the event said that the event is meant to raise awareness among Egyptians of ice hockey and encourage investment in the field, expecting Egypt to enter the world of winter sports in the near future.

“In places like Europe and North America, hockey is quite a common sport. But we look for countries that are trying to start new (hockey) programs and are trying to grow. So, we kind of try to come and help them,” Howe told Xinhua. “From our perspective, it’s just an honor to be able to support that mission,” he added.

Suleiman Mostafa, one of the Egyptian hockey players who was born in Canada and is currently living in the United States, was warming up ahead of one of the friendly games when he expressed his honor to come back to Egypt for the second time in his life and take part in this event.

“This tournament is designed to help people to gather and show the Egyptian community that we can play hockey in Egypt, and hopefully one day we will be able to play in our Olympic stage in winter sports in general,” said the young man.

“I learned to skate before I even walk,” he added, expressing his love for ice hockey and hope for its popularity in Egypt.

The ice hockey games attracted many spectators at the mall in Cairo, including Egyptians and foreigners.

Marc Poitevin, a Canadian businessman working and living in Egypt, said that he came to support ice sports in general, including curling, figure skating, hockey “and everything that you can do on ice.”

“I’d love to see one day Egypt have a team, whether hockey, curling or figure skating or even skiing, for the Winter Olympics. So, I think by creating awareness for the sport, it’s a great thing that could benefit society as a whole,” the Canadian told Xinhua.

The event was held under the patronage of the Egyptian Ministry of Youth and Sports and was attended by representatives from the ministry, the Egyptian Olympic Committee and the Egyptian Tourism Authority, as well as the Canadian ambassador to Egypt.

Sherif El-Erian, Secretary-General of the Egyptian Olympic Committee said that Egyptian sports officials are working on having a winter sports federation and national teams for the Winter Olympics.

“It will take time and effort, but someone has to start. If no one starts, we will never get there. Every sport has started from scratch. Now we have started a nucleus to have national teams representing Egypt in winter games,” El-Erian added.

“This is the beginning and hopefully it will be a good starting point,” the Egyptian official told Xinhua.