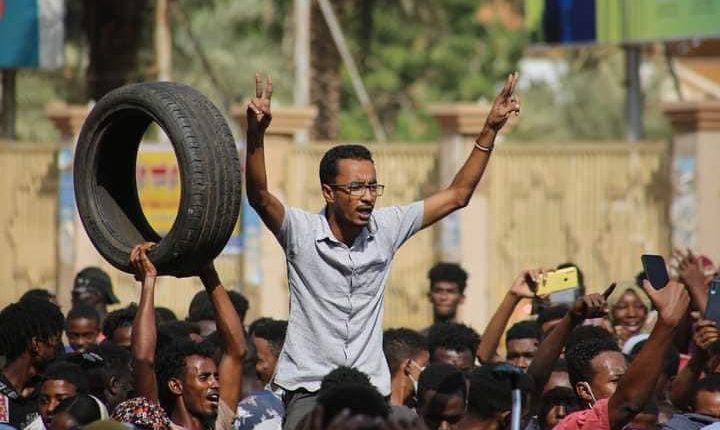 Sudan’s top General Abdel Fattah Al-Burhan, declared on Monday the state of emergency in all states of the country, dissolving the Sovereignty Council and the cabinet.

In a speech broadcasted on Sudanese television, Al-Burhan announced also suspending activation on some articles of the constitutional document, hours after the military arrested Prime Minister Abdalla Hamdok and ministers in the government and other politicians.

Moreover, Al-Burhan announced the dismissal of state governors, noting that a transitional technocrat government would rule Sudan until the elections, vowing to create a suitable environment for political parties leading to the elections.

He affirmed his country’s commitment to the signed international agreements, stressing its adherence to complete the democratic transition until handing over the leadership of the state to an elected civilian government.

The Sudanese military leader also announced the suspension of the work of the Anti-Corruption Commission, blaming the conflicts between politicians for the intervention of the army and seizing power. “There is a need for the army to intervene and protect the security and safety of the country, as stipulated in the constitutional declaration.”

Early on Monday, the Sudanese military placed Hamdok under house arrest and arrested several members of his civilian-led government.

Within hours, thousands of people in the capital Khartoum were taking to the streets in protest at the military’s moves. The army faced the demonstrations with live ammunition which led to at least 12 injuries in the vicinity of the General Command of the army in Khartoum according to Sudan’s Central Committee of Doctors.

Soldiers have stormed the headquarters of Sudan’s state broadcaster and detained some employees, the information ministry said, as part of what it has called a “coup”.

“Joint military forces have stormed the TV and radio headquarters in Omdurman and detained staff,” the ministry said in a statement posted on Facebook.

The internet has been shut down in the country but images and videos have appeared on social media showing angry crowds burning tires in the streets.

In a message from his house arrest, Hamdok called on the Sudanese people to adhere to peace and occupy the streets to defend their revolution. Whilst, international and Arab reactions continued, expressing concern about the political developments in Sudan.

Egypt, the closest neighbour to Sudan, said that Sudan’s security is part of its national security, calling on the parties to exercise self-restraint and to reach national consensus, according to a statement from the Ministry of Foreign Affairs.

The Arab League has also expressed concern over the situation in Sudan and called for “adherence to the arrangements for the transitional phase,” which provides for power-sharing between the military and civilians until general elections are held in the country. And, the EU called on all stakeholders and regional partners to put back on track of the transition process.

Furthermore, the United Nations denounced the “unacceptable” detention of the Sudanese Prime Minister and civilian leaders. The UN Secretary-General Antonio Guterres, condemned the ” ongoing military coup” in Sudan, calling for releasing Hamdouk and other officials.

Additionally, the African Union called for the resumption of consultations between Sudan’s military and civilians, the release of political leaders and strict respect of human rights.

In the meantime, Qatar, China and Algeria called on the Sudanese parties to commit to the constitutional document and resume the democratic path to a civilian government.

Whilst, the UK has firmly rejected the military’s move in Sudan, calling it an unacceptable betrayal of the Sudanese people and their democratic transition. Germany also called for an immediate end to the coup attempt and releasing the civilian politicians.

In September 2019, General Abdel Fattah Al-Burhan, sworn in as the first leader of the Sovereign Council, in front of the head of the country’s judiciary authority. Based on that post, Al-Burhan was authorised to lead a council of six civilians and four other military officers as part of a planned 39-month long transition to democracy.

According to the deal, a sovereign council, cabinet and legislative body should be formed. Ministers of defence and interior should be chosen by the military, and the other positions should be taken by pro-democracy candidates.

Burhan’s leadership to the Sovereign Council was planned for 21 months of the transitional period, and after that, a civilian member was scheduled to take over for 18 months until the scheduled elections in 2022. But everything has changed after Monday’s move.