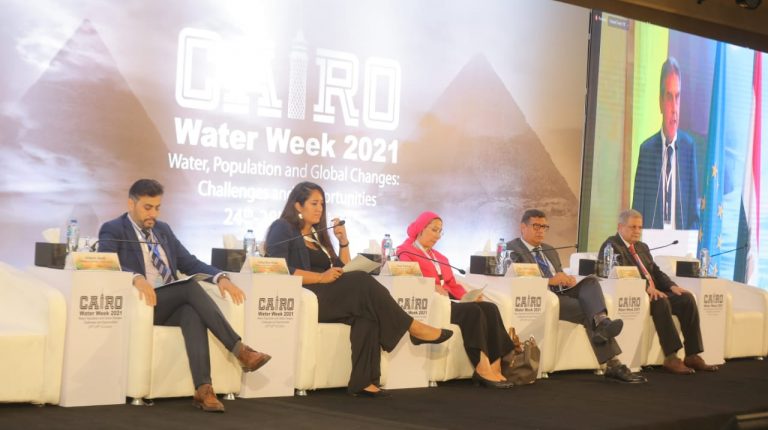 Sessions of the third day of the fourth edition of Cairo Water Week (CWW) resumed on Tuesday, as Egypt’s Minister of Water Resources and Irrigation Mohamed Abdel Aty, the organiser of the conference held several sessions with regional and international representatives on the sidelines of the event.

Abdel Aty, opened the twenty-first session of the Joint Commission for the Study and Development of the Nubian Sandstone Reservoir, in the presence of the commission’s members from countries; Egypt, Libya, Sudan and Chad.

During the session, the minister directed the importance for the authority to follow up on decisions and recommendations that would achieve optimal management of the reservoir’s resources and reach the maximum benefit from it, taking into account the rational use to preserve the rights of future generations as well as achieving development in the reservoir areas in the four countries.

He also stressed the importance of joint integration and coordination in all research and applied fields in relation to the reservoir and its resources, with a study of the application of modern irrigation systems to maximise the return from every drop of water in the reservoir.

The minister also highlighted the necessity of the implementation of integrated development projects and attention to the training aspect and achieving the principle of sustainable development in the region as a whole.

Moreover, Abdel Aty called on members of the commission to review the experiences of the National Water Research Center in agricultural and irrigation methods to achieve the highest possible use of the available resources and maximise crop productivity.

In the meantime, the European Investment Bank (EIB) in partnership with the Delegation of the European Union to Egypt, the French Development Agency (AFD), and the German Development Bank (KfW) organised a seminar to address the instruments and prospects of sustainable financing to water projects, on the sidelines of the conference.

During the session, the EIB Director of Lending Operations in EU Neighbouring Countries, Flavia Palanza said that “the comprehensive Egypt “Vision 2030” and the National Strategy for Water Supply and Sanitation (2008-2037) are excellent frameworks for policy dialogue and to guide investments in priority areas and projects in the water sector.”

The EIB is the largest lender to the water sector globally, with more than Є66bn for over 1400 projects. According to Palanza, in Egypt, the bank so far has provided financing of Є1bn to support 13 projects in the water and wastewater sector.

“We have supported for instance two phases of the Integrated Water Services Programme, the Kafr El-Sheikh wastewater treatment plant and the Alexandria West Sewage Treatment Plant expansion project, which will contribute to reducing the levels of pollution in Lake Maryout, El Max Bay and the Mediterranean Sea. Other projects are now starting to be implemented, such as the Fayoum Wastewater Expansion and the high priority Kitchener drain project,” he said.